This post is by Jeff Mac at our sister site, Living on the Cheap.

The beginning of fall brings with it many things, such as the start of school and a change in the weather. For many, the most important event in the fall is college football. The pageantry of marching bands and the green of the grass (except at Boise State) is echoed by another color. 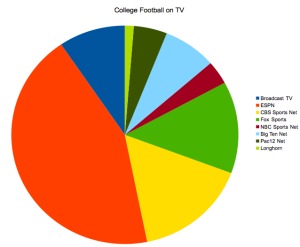 Only a bit more than 9 percent of college football games are on broadcast TV rather than cable stations. You can typically get two or three major games each weekend, so if you have followed Jody’s advice on ditching your cable service, you can grab them over the air for free. These will usually be the games with the most interesting back stories; they almost always feature a top 25 team.

ABC has the most games and usually the most interesting ones. NBC broadcasts all Notre Dame home games (and simulcasts these over the Internet for free) while CBS gets six SEC games during the season. Fox is left with three oddball games. I broke everything down into a spreadsheet if you want to wade through all the details (if you click that link, it downloads as an Excel document).

If you don’t have cable and you want to see more games, here are six ways to watch college sports online.

CBS and FOX are not very interested in helping you watch a free live feed of sports that are on their channels.

ESPN has the rights to about 44 percent of all the games played during the season. A certain portion of these are pushed over to ESPN3. While these are not usually the biggest games, if you have high-speed Internet, almost all providers will allow you to log on and watch these on your computer without a cable subscription.

Add this to ABC and, without spending any money, you have the ability to watch about 16 percent of all the college football games.

Your cellphone company may offer a package that streams some ESPN games. On Sprint, ESPN mobile is included, and the college football package is $2.99 a month. This gives you access to some of the major games on ESPN. You would be limited to viewing these on your phone unless you have an Apple TV or other way to push this to your TV. Verizon does something similar on its network.

If you have not quite gotten around to canceling your cable, you have some additional options for watching the game when you are not in front of your television. Basic cable almost always includes ESPN and ESPN2, which account for about 80 percent of all the college football on the ESPN networks. If you are at Grandma’s house for the Thanksgiving weekend and you are desperate to watch Western Michigan against Northern Illinois, you do have an option as long you have an Internet connection. The WatchESPN app for Android and iOS will allow you to do this. It requires that you authorize viewing by logging into your cable subscription, so if you have not set up a log-in with your cable company for paying bills and managing your account, you will need to do this first.

I have actually had as many as four different games streaming on multiple devices using this approach with the same log-in on Comcast, so there does not appear to be a limit to the number of log-ins. I have known a couple of impoverished college students that have borrowed their parents’ credentials to watch one of those games.

The conferences have their own apps for Android and iOS that allow streaming of games. To get access to all of this, you will have to download the ACC app, the Big10 app, the PAC12 app and any other conference you are interested in because they do not offer each others’ games. The apps offer season-long subscriptions to live games starting at $7.99 a season for the ACC. Keep in mind these are only for the games that are not televised on other channels.

All of the major conferences and even some teams (I am talking to you, Texas) have formed their own networks to cash in on televising games. This means that a lot of the second-tier games in a weekend may only show up on the Big 10 network, Pac 12 network or the Longhorn network. These are available as cable package add-ons targeted at the truly addicted fan.

CBS Sports Line is aggregating all of these conference channels for the somewhat painful price of $17.95 a month or $129.95 a year. In all fairness, this does give you access to a lot more than just college football games, but it is a chunk of change.

It is available on a web browser or as an app. Keep in mind that these CBS SportsLine games are primarily those Big 10, ACC, PAC 12 and other games that are not available on other media, such as ESPN or broadcast TV.

Of more interest to me is using it to watch a game I can’t get anywhere else, because the service does offer a free week-long trial. You will have to remember to cancel after the free trial or you will be charged. Also, take a close look at the schedule because sometimes CBS Sports offers only an audio feed of the game, which you can usually get elsewhere free. Look at the schedule by going here and selecting live feeds. If the icon next to the game is a speaker, it is only an audio feed.

You can always go old school. Hearing an audio feed of the big game is pretty simple. If you know the radio station that is affiliated with your team, you can probably put “WCFB.COM” in a Web browser and be presented with a play button immediately. If you don’t know what station airs your team’s games, then search for something like “Boise State Football Radio Network” or “East Carolina Football Radio Network,” and you can be listening over the Internet for free in a flash.

A couple of years ago, you could find several free websites on which you could watch your team from across the country. The NCAA has plugged most of these holes and the FBI has plugged a few more. They are getting very serious about enforcing their intellectual property rights.

While it is tempting to Google “Free college football online,” my research has found that most places advertising streaming of live sports online are lurking in the hope of putting malware and viruses on your computer. Please beware.

The men with control of the college football money are limiting the access to free options so they can maximize their profits on the game.

If the options above aren’t going to cover your need to assuage your football addiction, your best bet may be to band together with a friend – preferably one with a big TV and a cable subscription.