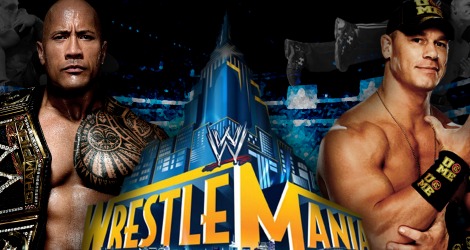 NBC’s “Wrestlemania 29: The World Television Premiere,” makes its debut this Saturday, August 3. For the fifth year in a row, NBC and the WWE partner up to bring wrestling to mainstream television. Wrestlemania 29, originally broadcast as a pay-per-view on April 7 from the MetLife Stadium in New Jersey, is the Super Bowl, World Series and Emmy Awards of professional wrestling.

I’ve been watching professional wrestling since I was a little girl with my brothers, having fun cheering for such legends as George “The Animal” Steel, Bruno Sammartino and, later Hulk Hogan and Andre the Giant. As a matter of fact, I would watch the WWE, then the World Wrestling Federation, on NBC as “Saturday Night’s Main Event” that aired occasionally from 1985 to 1992, in place of “Saturday Night Live.”

Today, my children and I attend events and watch the weekly broadcasts. We enjoy watching John Cena, CM Punk and The Big Show, who I had a chance to talk to during a recent press conference.

The WWE has been around for decades and their shows – “Monday Night Raw” on USA Network, “Main Event” on ION TV on Wednesday nights, and “Smack Down” on Friday nights on SyFy — are gaining more viewers than ever before.

The company’s media presence is global and has included movie production, such as “The Call,” with Halle Berry, and “The Marine 3: Homefront” starring their own Mike “The Miz” Mizanin.

The company has also produced reality shows, including WWE’s “Tough Enough” on USA Network, a wrestling competition show where the winner was awarded a developmental contract with the WWE and, most recently, “Total Divas” on E!, an inside look at the life of seven WWE divas.

“Don’t tell Vince (McMahon, the owner of the company), but I love what I do and would do it for free,” says the Big Show, a WWE wrestler who has been in the industry for 18 years, is nicknamed “The World’s Largest Athlete”, weighs 441 pounds, stands a mighty 7-feet tall, wears a 22 EEEEE size shoe and boasts a 64-inch chest.

“I have the best job in the world and never thought I’d be a wrestler who would see the pyramids in Egypt and travel around the world,” he said. “The WWE is loved around the world.”

Big Show credits the success of the company to the team of athletes and production people involved in the show. “Every week we go out there and put on the best show that we can, and when it’s over, we ask ourselves how we improve next week,” he says. “Besides, where else can you see a 7-foot, 440 pound man wear Spandex?”

The WWE also takes pride in their charity work, including the Special Olympics and their own Be A STAR (Show Tolerance and Respect) anti-bullying campaign.

“The people who work for the WWE have a passion for what they do,” says the Big Show. “We are a family and we care about family and giving back.”