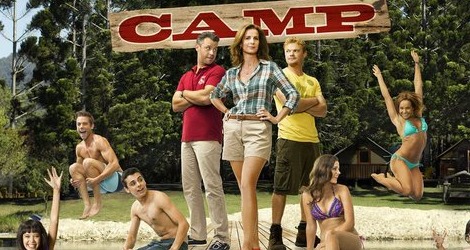 I am the first to admit, I was behind in watching the first four episodes of “Camp,” and that was a mistake. The show has so many storylines that I needed a pen and paper to keep track of who, what, when, where and why!

That being said, “Camp” stars the very popular Rachel Griffiths (“Brothers and Sisters,” “Six Feet Under”) as Mackenzie (Mack) Granger, the owner of Little Owl Summer Camp who’s struggling to come to terms with her recent divorce and keep the camp afloat.

The show introduces a lot of characters in the first episode. There is Mack; her ex-husband Steve (Jonathan LaPaglia, who’s dating a young Russian waxing technologist – geez); Buzz (Charles Grounds), Mack and Steve’s teenage son whose mission it is to lose his virginity by the end of summer; Roger (Rodger Corser), who runs Ridgefield, the “rich kids” camp across the lake and wants to buy Little Owl from Mack; Cole (Nikolai Nikolaeff), the maintenance guy who watches over Mack (we find out he secretly likes her); Sarah (Dena Kaplan), a counselor who has a “summer only” fling with fellow camp employee Robbie (Tim Pocock, “X-Men: Wolverine”), and the very good looking writer, Miguel Santos (Juan Pablo Di Pace – did I say very good looking?), who Sarah is slowly falling for.

There’s also Kip (Tom Green), who didn’t want to go to camp at all and has leukemia; and Marina (Lily Sullivan), who Kip is falling for (but she likes someone else – of course).

This is just part of the cast! Others include Robbie’s mom, who is always in financial trouble (she’s a gambler); several mean girls to create subplots; and Mack’s co-workers who offer advice (not sure if it’s always good advice) regarding her relationship with her ex-husband. Phew! That’s just my shortened version! The second and third episodes start to develop the characters, and we get a feel for what storyline we’ll be drawn into the most. My favorite – and I’m sure I speak for the majority – is the one that is focused on Mack. I do like Kip and Marina too. There are so many; we can all choose one!

I think the writers want realistic stories, as well as variety. Things that could really happen at camp or real life. The show is advertised as a drama, but there IS definitely humor mixed into the dialog, which is much needed and appreciated for a show like “Camp.”

Episode four is called “Valentine’s Day in July.” Appropriate for a summer camp, since a lot of little romances and crushes happen in the summer (and at camp). The biggest romantic story is between Mack, Cole and Roger. I loved when Mack was talking to her fellow adult employees and said, “I don’t know why I’m doing a Valentine’s Day. I might as well water board myself.” Funny.

Mack can’t help her animal attraction towards Roger, while Cole still hasn’t told her how he feels. There is a very funny fight scene between Roger and Cole – almost slapstick, which I always find amusing. Mack, however, didn’t!

Kip and Chloe are still at it, although Kip really likes Marina. Chloe is just not appealing at all. She seems to like Kip only because he is sick. Kip is mad and breaks it off with her when he sees Marina ripping down topless photos of herself that have been hung around the camp. He thinks Chloe did it, but finds out it was Zoe and the mean girls, so he apologizes and gets back together with her.  Arrr…

It was cute when Kip finally decides to tell Marina how he feels about her and does it in the form of a poem. But of course, it is short lived when he chickens out and throws the poem away. If that’s not enough, guitar playing Greg (who likes Marina) finds out and writes a song from the poem to impress her. Great.

My least favorite storyline is between Sarah (she doesn’t do anything for me), Robbie and Miguel. Sarah cares about Robbie, but she seems like she wants more adventure and romance. Miguel, with his writing and travel, has that to offer – even if it’s in her own mind. One night the three bump into each other at a bar. Sarah pretends not to have ever met Miguel. She felt awkward – or guilty – in front of Robbie, I think. People do this. Silly, right?

There is a lot to follow on “Camp,” but it is a show that is perfect for summer viewing. It is light, fun and not too serious. I am a little surprised at some of the things that are said on air, though (is this network TV?).  I guess it’s a sign of the times. If you like Rachel Griffiths, you will like her in “Camp.”

Side Note: I found out yesterday that my father passed away. Although expected, you are never really ready. A lot of reminiscing has already started in my mind. One thing my dad loved was TV and old movies. He had an incredible sense of humor and one of his favorite things to do was to watch “The Tonight Show with Johnny Carson.” I used to do this with him in the summers long ago. He would make egg salad sandwiches for us (I know, at 11:30!) and we would sit and watch – and boy, would he laugh. I think tonight I will make an egg salad sandwich and watch “The Tonight Show.” Even though Johnny and my dad are gone, it will take me back to something he really enjoyed. Rest in Peace dad.