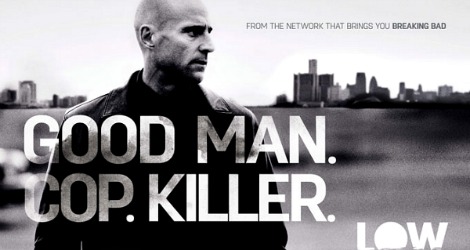 After watching and reviewing “Broadchurch” (Wed., 10/9c, BBC America), viewing “Low Winter Sun” was a bit of a letdown.

Both are procedural crime dramas and both deal with murders most foul. “Low Winter Sun” is far more grittier than “Broadchurch” and delves with police corruption, but for me “Broadchurch” is the better storyteller so far. I guess I’m more a cerebral crime buff than a visceral one.

Hoping to benefit from “Breaking Bad’s” final season opener as a lead in, “Low Winter Sun” did respectfully well with 2.4 million viewers, but that’s just shy of half of the viewers that tuned in to see Walt and Jesse. I imagine the numbers may drop as the weeks go on.

I watched the first two episodes and frankly, I’m no more invested in any of the characters after finishing the second episode than I was watching the first five minutes of the series premiere. There doesn’t seem to be a good cop, bad cop mentality with this show. It’s more like bad cop, worse cop.

None of the characters are likeable, and I don’t know about you, but I had a hard time following who’s backstabbing who, who’s shooting who, who’s the clean cop (if there is one), what’s that guy from Castle doing on this show, and why is some pasty white guy always the guy leading the Internal Affairs investigation in almost every cop show? I found it confusing and a little too dark for my taste.

I had high hopes for the show, too. I love procedural crime dramas. “Homicide: Life on the Streets” is by far my favorite show of this genre, and all other shows following it are simply trying their best to emulate the naiveté of Detective Tim Bayliss, the brusque yet gentle manner of Lieutenant Al Giardello, the quiet smarts of Detective Frank Pembleton (for which Andre Braugher received an Emmy for his portrayal) or even the comic relief that is John Munch (Richard Belzer, who originated the role on HLOTS, went on to play the character on a record ten different television shows).

Perhaps Jane’s right in that “Low Winter Sun” may take an investment of several episodes to become a fan.  It took a good four episodes of “House of Cards” before things started to get really juicy and interesting, so I’m willing to take a gander, but if by the fifth episode I find myself still not caring for any of the characters, well then I’ll just have to wait for “Mad Men” to come back on AMC.