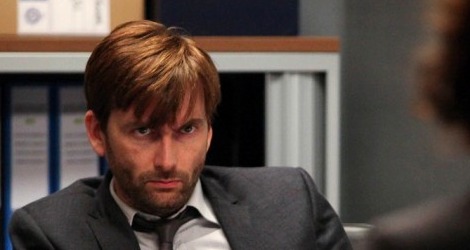 “Broadchurch” is an 8-episode series on BBC America (Wednesdays, 10/9c) starring David Tennant as Detective Inspector Alec Hardy, a big city detective who relocates to the small town of Broadchurch after he lands in the middle of a scandal during a previous investigation.

Thinking he’s going to live out a quiet existence in this quaint little town, he soon finds himself in the middle of the murder investigation of Daniel Latimer, an 11-year-old boy.

He’s joined by Detective Sergeant Ellie Miller (Olivia Colman), his new subordinate, who recently came home from holiday to find her promotion snaked out from under her by Hardy. DS Miller has lived all her life in Broadchurch and knows the murder victim and his family. While Hardy is steely in his reserve toward the family and the town, Miller finds it hard to set aside her personal life from her job during this investigation.

The quiet town is soo n overrun by the media frenzy surrounding the murder which threatens to pull the town apart.

I’m rather enjoying this new series because it’s been far too long since I’ve seen David Tennant in anything since he left “Doctor Who.”

In fact, Broadchurch is  a bit of a “Doctor Who” trifecta as not only does it star Tennant, but it also features  Arthur Darvill (Rory from “Doctor Who”) as the local vicar and David Bradley as a local shop owner.

Bradley is best known for his roles as Mr. Filch in the “Harry Potter” films and as Walder Frey on “Game of Thrones.” Bradley will star as the first “Doctor Who” in the TV movie “An Adventure in Time and Space,” which is a re-telling of the creation of the “Doctor Who” series.

While it’s a typical procedural crime drama, the series only runs eight episodes, and I find that I rather like that. It’s short and sweet. Just enough to reel you in, but not too much that you’ll get bored with it. Though “Broadchurch” was picked up for a second season, this particular crime will be solved by the end of the eighth episode. It was so popular in Britain that Fox has already picked up rights to make an American version of it.

I guess all they’ll have to do is change the quiet seaside town of Broadchurch to say a quiet seaside town in Maine. Cast some former sci-fi actors (Gina Torres, Alan Tudyk, anyone?) and you’ve got yourself a bona fide hit. I just hope Fox doesn’t try to draw the eight-episode story arc into 24.

Questions already abound after watching the first episode. Is it the vicar? The dad? The shop owner? The friend? Or could it be that weird telephone repair guy who has communicated with the dead?

One thing’s for sure, I will be gripped to my television on Wednesday nights to watch this show.

Have you seen “Broadchurch”? What do you think of it?