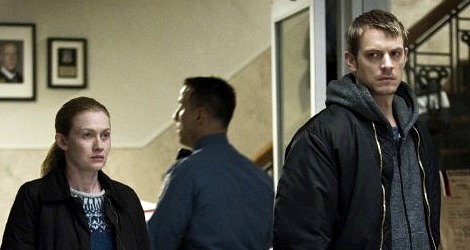 Well, we knew there would be a few twists and turns in the season three finale of “The Killing,” but did it end how you thought it would? I was always a little suspicious about Skinner. The fact that he and Linden were former lovers and the fact that he just seemed too “together” were tip-offs.

And of course, “The Killing” always takes us down a few dead-end roads. Because the tension between Holder and Carl Reddick was so high, I figured that one would go nowhere. But who knew they’d end up working together in the end? That’s a great twist.

And Joe Mills was always a red herring, in my mind. Yeah, he’s a sleazy character who took sickening videos of girls, but that didn’t necessarily make him a killer, in my mind. No, it’s always the one you least suspect. There was a point where I thought maybe Skinner and Reddick were working together, but that quickly passed.

The episode begins with, well, an ending of sorts. Linden is out running (and the sun is shining – wheee!), and goes home to find Skinner there, at which point they have sex. I must say, Linden’s instincts about people are not all that great sometimes. He’s a cool cucumber to not set off some alarms with her somewhere along the way. Remember, they have a long history. And then there’s this exchange:

“I keep secrets. [My wife says] she doesn’t know me anymore. She’s right. I don’t tell her anything. Haven’t been able to for years. Sometimes I think people like us are just supposed to be alone.” – Skinner

Holder is attending Bullet’s funeral, and has a little chat with Danette, who’s also at the funeral. “She took care of your daughter,” says Holder. “She tried to protect her as best she could. She was like a little pitbull.”

Then Holder goes to see his girlfriend and make things right. “I messed up,” he tells her. “I should have told you about my past. You’re a step up for me. and I’m a step down for you. Five steps down for you. I just wanted you to see the good stuff.”

They make up, and she says, “For what it’s worth, you’re actually a half step up for me.” To which he replies, “You must have been hanging out with some real losers.” “Lawyers,” she says.

He also makes amends with his old partner, Reddick. All seems ok.

When Linden and Holder are called to the scene of a murder, they find a charred body inside a burned-out car. The coroner identifies the victim as a female who died sometime the previous day from a gunshot to the head, execution style. And whoever did it removed all of her teeth – so she couldn’t be identified. Also, her ring finger is missing, though it’s healed a bit, so that probably happened a couple of weeks ago.

Linden and Holder think they’ve found Angie Gower, but the only person who would have known about Joe Mills and who could have planted the rings to frame Mills would be another cop.

At the prison, Henderson is cleaning out Seward’s cell. Hmmm … thoughts on the significance of the “National Geographic” and “Lonesome Dove” paperback? That Seward was a pretty normal guy?

Becker is cleaning out his locker and says he’s leaving. “Too much going on at home,” he says. And yeah, whatever happened with his son being hauled off in handcuffs? Are they saving that for next season (if there is one – I don’t think there’s been a decision yet, has there?).

Becker tells Henderson, “Don’t get too comfortable here. I spent half my life in this place. Just as much a prisoner as the rest of them.”

At the station, Linden goes in to Skinner’s office, and he says they’re expanding the scope of his team, so he’ll be keeping his office for a while (um … not). Then they had that weird exchange where he said she used to sing in the car, the same song over and over, and it used to drive him crazy. She doesn’t remember … so I wonder if he was thinking of a different girl … ?

Anyway, he asks her to come up to the lake house for the weekend. She doesn’t confirm one way or the other, but says maybe she’ll see him later.

Here’s where things get really interesting. Holder and Linden, after determining that it must be a cop, go to talk to the dad of the first victim, Bridget, who was killed in 2009. Holder sees a picture of Bridget and Reddick on the wall. It was a student program where kids got to learn how to be cops.

From there, they tramp out through the woods to find a treehouse that Seward built for Adrian. Linden figures out that Adrian saw whatever cop it was from that treehouse, because that’s where the bodies were found. So whoever killed Tricia Seward didn’t mean to kill her. She got in the way. They were really after Adrian.

Cut to Adrian walking home from school. A car pulls up, and we later learn that he thought someone was following him, so he went to a neighbor’s house, and the neighbor drove him home. Skinner is adamant about Holder and Linden staying to search for Adrian. He’ll go take care of Reddick. [RED FLAG]

Internal Affairs corners Holder on the street and say they have to talk with him. Holder thinks Reddick is the one who called them, but how could that be? Everything was fine between Holder and Reddick. Internal Affairs says the complaint noted that Holder made threatening phone calls to Reddick and his family, and was fixated on Reddick’s daughter. What?! No, says Holder. They’ve got the wrong guy.

We learn that it was Skinner who called, and Skinner is acting really weird when Linden goes to his house to get him to call off Internal Affairs.

That’s when she sees Kallie’s ring on Skinner’s daughter’s hand. (And really? You take a ring from a girl you’ve killed – I guess he killed her, right? Do we know that for sure? – and give it to your daughter? That’s sick!) Things go from bad to worse. Fast. Linden pulls a gun on Skinner, who says if she wants to find Adrian alive, she’ll get in the car with him.

Ok, really? Here’s where I started yelling at the TV. I guess I can see not wanting to take Skinner to the station – they’d think she was nuts. But why didn’t she call Holder and tell him what’s going on? Even if he’s at Internal Affairs, it seems like she could have gotten him on the phone.

Anyway, Skinner and Linden get in the car and start driving, into the night (that lake house must be a ways away). Meanwhile, Holder manages to get out of Internal Affairs by playing along and saying ok, jig’s up. I planted a bomb in Reddick’s car. “If I were you, I’d get my fat ass out of this room and go get Reddick,” he tells the IE guys. Reddick shows up and Holder is let go. Which I’m not sure I understand. Wouldn’t they keep Holder for talking so weirdly?

In the car, Skinner tells Linden about Bridget – how he hit her, and then had to kill her; otherwise, she would have taken him down. Linden gets out of the car and throws up, then starts crying. Who wouldn’t? She just slept with the guy that morning, for cripes sake.

Meanwhile, Holder went to Skinner’s wife’s house and got directions to the lake house. He drives up there and breaks in. No Adrian. A little ways away, Skinner tells Linden he’s got Adrian in the trunk. She tells him to give her the keys, then shoots him. Holder hears the shot and runs to find her.

Skinner, still alive, says, “I lied. If there’s one thing I regret, it’s killing that boy. Because I don’t kill little children.” At this point, we see Reddick finding Adrian – alive and well – in a cemetery near his mom’s grave.

Holder finds Linden still holding a gun on Skinner. He tells her to put the gun down. Don’t do this, he says. As Skinner is pleading with her, saying she loves him, how could she do this, Linden lets him have it. She shoots him and kills him.

And … that’s where it ends. There’s certainly enough drama to carry us into another season. Holder will have to either lie and protect Linden, or tell the truth and get snarled up in a case and maybe watch her go to prison. Though I can’t see that happening – they could just say it was self defense, right? She probably still has Skinner’s guns on her.

The scene with Danette on the bridge was just beautiful. Stunning cinematography, like a feature film. In fact, the first half of this finale was very quiet and meditative.

Twitch throwing the drugs away. That’s a hopeful sign for him and Lyric, who’s got a job in a cafeteria.

When Lyric leaves her job, whose car does she get into? I was thinking Pastor Mike, but he got hauled away, right?

What did you guys think of this episode? Whose car did Lyric get into? What about the “Lonesome Dove” paperback? What happened with Becker’s son? What about Linden not remembering she sang in Skinner’s car? How did Holder get out of Internal Affairs so easy?

And do you think “The Killing” will be back for season four? If AMC doesn’t pick it up, I could see it possibly coming back with a new season on Netflix, since they struck that deal with Netflix for season three.