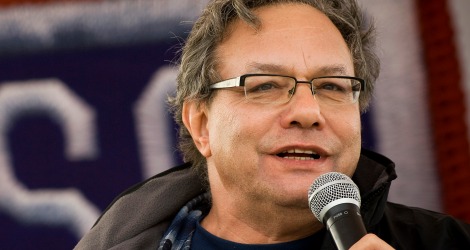 [Editor’s Note: Today we welcome Michele “Wojo” Wojciechowski to our Reel Life With Jane family! Wojo will be interviewing comedians for a brand new column called “The Comedy Corner,” and we’re super happy to have her voice on the site … Jane]

What’s one of your favorite childhood memories?

One of my favorite childhood memories was when my friends and I, we’d go hang at the Hot Shoppes on a Friday or Saturday night.  They served Mighty Mo’s [he chuckles] and French fries with gravy. It was the initial group of restaurants that Marriott had in Washington and Maryland. [Black grew up in Maryland.]

Who’s your comedy hero or inspiration?

There are a few. George Carlin, who was very instrumental in terms of getting people to see me because he would talk about me, which was kind of extraordinary. That really was huge for me. Lenny Bruce, Richard Pryor, and most of the comics who appeared on “The Ed Sullivan Show,” but especially Bob Newhart, Shelley Berman, Lily Tomlin, and Jonathan Winters.

If you had to have a completely different career, what would you do and why?

I’d be teaching. Because I’ve always liked it. I mean, even though it’s an audience that’s forced to be there, it’s fun. [he laughs]. And I probably would have taught theater, but as it is, I teach through the experience of doing stand-up comedy, and I enjoy doing that.

Read more about Lewis Black, his start in theater, and his upcoming Pay-Per-View and Video on Demand live comedy special at Parade.com.