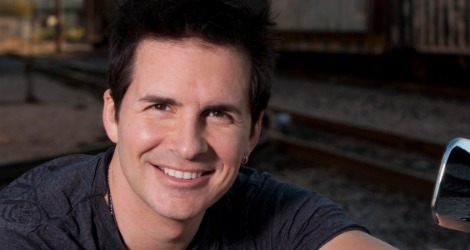 (Today, Wojo throws three questions at actor, comedian, radio personality, and talk show host Hal Sparks. He played Michael Novotny on “Queer as Folk,” currently plays the dad on Disney’s “Lab Rats,” and is on the radio with “The Hal Sparks Radio Program Mega-Worldwide” and “Hump Days with Hal” on “The Stephanie Miller Show.” Read more about Hal in Wojo’s story over at Parade.com.)

What’s one of your favorite childhood memories?

One of them? That’s tough. There’s quite a few. I would say when I got into the Funniest Teenager in Chicago contest. You had to submit a cassette tape of your act. When I got accepted, I was in the student lounge at New Trier [High School], and my acting teacher got word back that I had made it into the contest. She came down into the lounge looking for me because she knew I was ditching class. She found me down there, and she gave me the thumbs up from way across the room. And I jumped up on the table — literally on the table — and I jumped from table to table all the way across the room to her, and it was like 50 yards.

I was so excited that I had made it in. It was an indicator — it was a milestone — to know that I was on the path, that it was starting to work.

Who in the comedy world has most inspired you to get into this and why?

I would say it was a combination of George Carlin and Steve Martin, although Carlin would be the primary one because he did [stand-up comedy] his whole life and viewed it as something he would do his whole life … That’s what inspired me to go ‘Ok, this isn’t just a stepping stone activity that people pick up for a short time.’ He was a genius. He wrote all the time. And I found him very funny at the same time.

If you had to choose a completely different career, what would you do?

If you want me to stop being the comedian for any length of time, you’re going to have to elect me President. And even then, I can’t promise you I won’t tell jokes on the state’s dime.