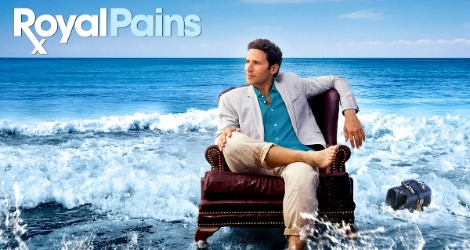 Reading about a recent tourism campaign by Albuquerque to promote itself via the TV show “Breaking Bad” reminded me that I have seen several TV show locations lately that take full advantage of their place and lure me to want to travel.

Definitely on the lighter side, “Royal Pains” takes a humorous look at life among the über wealthy in the Hamptons through the eyes of a concierge medicine team. I’ll guarantee that you’ll be longing for the sweet life on the beaches and in the quaint shops — not to mention the ostentatious mansions that form a backdrop for this comedy with an endearing cast, headed by Mark Feuerstein. Feuerstein plays “Hank” Lawson, who left/got kicked out of his New York City E.R. room and was lured to the Hamptons by his brother.

Apparently, the residents don’t mind the occasional skewering of the over indulgence. In a Hamptons Magazine  interview with co-star Paulo Coztanzo, who plays the bumbling brother, he says production often calls on Hamptonites to serve as extras. ‘The local people are so nice to us — it’s almost like the show is a mascot to the Hamptons,” says Costanzo. “It’s their hometown show.”

For me, the highlights of the show are fashion-forward Rashma Setty, whose character has more common sense than the rest combined. Another member of this nice ensemble cast that came late to the scene is totally lovable in his socially inept but brilliant way — Dr. Sacani, played by Ben Shankman.

And of course, there’s the perennially mysterious billionaire Boris, played with aristocratic authority by Campbell Scott. Which is my way of saying, I guess, that a show cannot live by setting alone — although when you’re talking about the Hamptons, it is definitely a toss-up.

USA Network  provides a helpful guide to the Hamptons of “Royal Pains.”

All of the British shows that come to us via “Masterpiece Theater” and “Masterpiece Mysteries” have wonderful locations to inspire travel. I’m particularly drawn to the in-depth look at the college town, Oxford  in two mysteries.

I have not been outside of London (except for a short trip to Hampton Castle) and never realized until I saw these shows how appealing this town really is. Yes, I’m interested in it from a historical point of view, but besides that, it is bursting with colorful gardens and lovely walks. Definitely worth a trip to England.

“Inspector Lewis” is a spin-off from the earlier “Inspector Morse,” with actor Kevin Whately playing Robbie Lewis, who has grown from protege of Morse to his own role. Likewise, in the script, Lewis now wants to retire and hand things over to HIS protege, played by Laurence Fox. The mysteries are intellectual rather than action-oriented and deal with the personalities of the policemen and their personal problems as well as the crimes.

Click through and listen to the director and stars of “Inspector Lewis” talk about their favorite locations in Oxford, and here’s a helpful map of the “Morse”  TV Show Locations. If you’re heading to Oxford, tuck this list of sites used in the shows into your suitcase.

In a prequel to “Inspector Morse” (which “Inspector Lewis” is a sequel to — confused yet?), “Endeavor” shows us the young Endeavour Morse, feeling his way in the police department. Unquestionably brilliant, he was “sent down” from university and is continually put down for that lack of degree. But his love of puzzles and opera aid him in solving the most difficult crimes in the academic community as he struggles as a rookie policeman back at the university town where he failed to succeed as a student.

I enjoy the unusual faces that British TV chooses. Turning back to American TV you feel as though all the actors just won beauty contests, but in British Drama they have interesting faces, if not beautiful. Chief interesting face of “Endeavor” is the young cop himself, played by Shaun Evans. His rumpled, harried family-man boss, Fred Thursday is played by Roger Allam, and all the minor roles are guaranteed to be good actors, as well.

What are your favorite TV show locations that inspire travel? Read more about my favorites over at A Traveler’s Library.