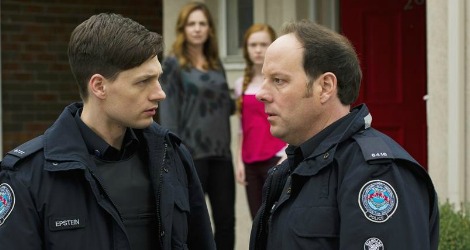 This episode of “Rookie Blue” was definitely a tough one for Gail!

A teenager joy-riding in a stolen taxi cab has Nick checking out the surveillance tape at the gas station where the cab was parked. Caught on the tape, eight hours before the theft, is a man taking a woman, obviously out cold, out of the same cab.

It turns out the cab had been evidence in another case. The Ross Perik case, in which Detective Jerry Barber, Traci’s fiancé, lost his life.

It soon becomes clear the team’s dealing with a copycat murderer who’s following Perik’s MO to the letter, including things that were never released to the media. Detective Luke Callaghan returns to the station to help with the case – I kind of expected some sort of sparks to fly somewhere, given his history with both Andy and Sam, but there wasn’t much of anything other than a few “looks.”

Ross Perik refuses to talk to anyone but Gail Peck; Gail had been his last victim. Everyone tries to protect Gail from having to talk with Perik, but eventually it becomes obvious she’ll have to if they’re to learn enough to find the copycat in time to save his victim.

During the interview, Perik’s (who appears to be a former psychiatrist) really pushing all of Gail’s buttons, trying to get her to reveal her “secrets” to him. They can swap secrets, he suggests, so she starts by telling him about shoplifting as a teenager. That’s not the kind of thing he’s looking for, though, so she ups the stakes by telling him about accidentally killing a kitten back when she was nine.

Perik’s pleased with this. He tells her there might be someone who might be the copycat, someone he hasn’t seen for a while. He starts talking to her about love, asking her who was on the other side when she made her escape from him. She answers, “My boyfriend,” and Perik keeps pushing at her, claiming he can see the guilt on her face, and she has to give him more if she wants to save the victim.

Gail gives in and tells him she slept with someone else because she had been jealous. Unknown to her, though, Nick’s in the next room with Luke and hears everything.

Perik tries to keep Gail dangling, but she’s had enough. She stands up to walk out on him, and he really doesn’t want that. Trying to keep her there, he tells her what he knows. The person they want is another prisoner, an inmate who ran the prison library. Luke discovers the man had just been paroled a few weeks ago. They track the guy down, and get there in time to save the victim.

There are a few other things going on in the episode. Frank sends Traci to work with Steve Peck, Gail’s brother, who’s with the Guns and Gangs team; everyone wants to keep her out of the case because of what happened with Jerry. So the two of them spend a bit of time getting to know each other better.

And Dov’s not very happy to learn Chris is gone. (And I’d like to know – is Chris really gone? I mean, no way, not like that, in that quiet, way too quiet way. Surely it can’t be permanent!) So Dov’s been pretty cranky all day, but near the end, Oliver drops his own bomb on Dov: he’s left Zoe. Of course we’ve all known for a while it hasn’t been working out.

But mostly, this episode is about Gail. After the copycat’s arrest, Gail and Nick sit in his truck, trying to talk it out. Gail brings up his going away on holiday with Andy instead of coming home when he had the weekend off while undercover. Nick replies, “Gail, I didn’t come home. It doesn’t mean I don’t want to be with you.” And Gail says, “No, it means you wanted to be with her more.” And then (oh, poor Gail!) Nick says, “It was a crush. I thought it would go away.”

Gail’s definitely the mean girl, but it’s hard not to feel sorry for her. Giving up her secrets like that, to help find the copycat and save a woman’s life, only to find in doing so, she’s destroyed her relationship with Nick. And really, I was a little stunned when Nick admitted he had a “crush” on Andy; he’s always seemed to see through Gail’s prickly icy interior, loving who she is inside the front she puts up.

It will be so interesting to see how all these relationships pan out over the next few episodes!