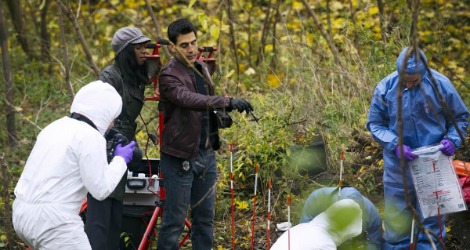 It’s Friday the 13th, and you just know it’s going to be a weird shift for the gang at 15 Division on “Rookie Blue.”

The day starts with a grisly discovery: a skeleton is discovered in a ravine. The bones date back to the missing persons case of a teenage boy from ten years ago, one in which Sam, a rookie himself at the time, was involved. Sam brings his old training officer and mentor, Charlie Walsh, into the case; Charlie had been the lead investigator in the original missing persons case.

The bones show that the victim suffered a lot of trauma, injuries consistent with impact with a moving vehicle. But lab results show that the boy had died from drowning.

So who could have written the letter purportedly from the Dallas police, advising them the credit card had been used in Dallas? There’s a word misspelled in the letter, one that Charlie always misspells. Sam remembers the night before they started on the missing persons case, he and Charlie had gone out drinking with some other officers. Putting two and two together, he comes up with an answer he really doesn’t like. But like it or not, he has to talk to Charlie about it.

Charlie admits he had run down the boy; it was an accident waiting to happen, he insists, something that would have happened whether or not he had been drinking. Sam tells him the boy was alive when he was dragged into the river that killed him.

Charlie threatens to kill himself, and Sam finally convinces him to hand over his gun by promising him he wouldn’t pursue things any further. Back at the station, Sam grimly tells Traci to pack up the file. He’s going to stick with his promise. But a little later on, Charlie walks into the station. He’s ready to face the music.

Meanwhile, a practicing witch called Celery (yes! Celery!) has Oliver mesmerized; is she really magical? She keeps popping up in places he could have sworn she hadn’t been before. Celery’s at the station to report a burglary by a disgruntled client. She’d sold the client a love potion, but when it didn’t work, the client took Celery’s jewelry case. Chloe and Dov find the client, and Celery gets her jewelry case back. But then the client becomes ill – she vomits all over Dov’s shoes, and insists the witch poisoned her. Then she keels over. They rush her to the hospital.

Back at the station, Celery explains her client was supposed to bathe in the love potion, not drink it. Did she tell her client that? Well, of course. Plus it’s written clearly on the bottle. At the hospital, Chloe and Dov break the news to the client that she wasn’t supposed to have drunk the potion. Of course I knew that, she tells them. But it wasn’t working and I was desperate.

And just then, the client’s old boyfriend, the one she was trying to get back, rushes into the hospital room and wraps his arms around her. Back at the station, Celery says, sometimes my potions just take a little bit of time.

There are a few other things going on. Andy and Nick investigate curious sounds coming from an abandoned warehouse; Nick is really spooked, and when they appear to corner someone dangerous, they call for backup. As their backup arrives, they discover it’s only a mannequin. As Andy says, “we’re never going to live this one down.”

Plus, Andy knows something’s up with Nick. Why did he and Gail break up? Nick, of course, isn’t about to tell her.

And what’s going on with Gail? Well, she spends the entire episode at the morgue with Holly, the forensic pathologist. I really liked Holly! She doesn’t react to any of Gail’s insults. I think it’s exactly the kind of reception Gail needs. At the end, Gail tells her about creating emergency situations to get out of relationships. Holly says to her, “I used to be like that, but it turns out I didn’t like men.” Gail says, “I don’t think I like men either.” Holly says, “I mean, I’m a lesbian.” And Gail says, “Oh. I mean, I hate people.”

Great show! What I want to know is, will they finally give poor Oliver a love interest? The guy’s had a tough time with his marriage since the show started, with his wife in love with another guy – really, I think he deserves to have some personal happiness.

Marlo’s struggling with her decision not to tell Sam about her bipolar disorder, and meanwhile, Sam’s feeling it a little when he sees Andy and Nick horsing around as they’re leaving the station. I don’t know how I want the whole Sam and Andy and Nick thing work out. I mean, in real life, Andy and Nick would make the most adorable couple, but seriously, how interesting would that be, seeing the boy next door getting together with the girl next door?

And Gail, despite all her insults, appears to like Holly enough to open up to her. Is that a relationship waiting to happen?

No mention of Chris in this show. I still can’t believe they’d let him go off the show like that, without any sort of fanfare. Surely he’ll be back?