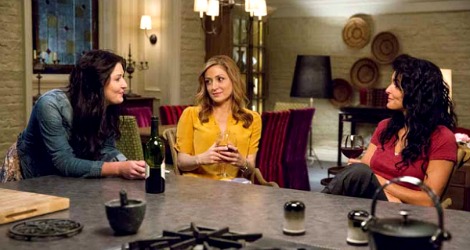 Wow! I’m so glad my kids never played hockey. Apparently, if you look at someone the wrong way, you’ll get punched in the face. Or at least, that’s what happened on this week’s episode of “Rizzoli & Isles.”

The episode begins with a woman at a hockey game, and when she goes to leave, she accidentally brushes against one of the hockey moms, who then punches her in the face. Things don’t get any better out in the parking garage, when someone slits the woman’s throat with a hockey skate. Geez!

Cut to Maura, Jane and Angela in Maura’s closet. She’s hired Angela to help her clear out some of the clutter (Why, Maura? We love your fashionable clutter, and in your closet, it’s hardly clutter – more like a glorious display of stylish stuff). The conversation went something like this:

“No, I paid to have it tailored,” says Maura, when confronted with the idea of giving a piece of clothing away.

“Why, so we could lord it over all the other frumpy frocks?” says Jane, who says she’d be happy with just ONE matching pair of shoes (she’s still wearing the protective boot from when she sprained her ankle last week).

Then Cailin shows up and asks if she can stay there for three weeks while Hope is in Europe. Apparently, Hope hired someone to “babysit” Cailin. Keep in mind, Cailin is 19.

Maura says yes, and Cailin goes to the spare bedroom and immediately turns the music up on ten. Half-Sisters!

At the hockey crime scene, there’s a bucket of blood surrounding the poor woman on the floor of the parking garage. “The human body holds six quarts of blood and there’s about five of them on the ground,” says Korsak, as Frost attempts not to throw up and Frankie flirts with a rookie cop.

Inside at the game, Jane has to get tough with the ref to get him to stop calling her “mom” and also stop the game. “Nobody is leaving the arena unless it’s in the back of a squad car,” she says. I love Jane, and not just because we have the same name.

In the parking garage, the crew pieces together that the victim has a broken nose and a slit throat – from two different attacks. Turns out the first is from an aggressive hockey mom, Mary Bigsby (Jennifer Hasty), who punched the victim inside when she accidentally brushed by her.

The victim, Dr. Carla Dalton (Laura Niemi), was a salesperson retrieving used no-drip helmet pads, which tell whether a kid is dehydrated. Turns out no such company exists. Back at the station, Mary Bigsby throws up when she sees a photo of the victim’s slit throat. Not so tough now, are you, Mary? Everyone is throwing up around here.

Meanwhile, Maura’s freaked out because Cailin is missing – for four hours. Turns out she was at the library and turned her phone off so she could study. Maura gets ticked at herself for getting ticked at Cailin, especially the next morning when she wakes up to find her kitchen a mess and Cailin cooking breakfast with a few friends.

“Children push buttons you didn’t even know you had,” says Angela, who advises setting some boundaries and sticking to them. “Teenagers are like big toddlers. You would see the cute toddler in her if she was yours.”

Back at the station, the crew determines that there was paraffin in the wound, meaning the weapon was a hockey skate. If you’re killing with that, you’re not planning it. Korsak speculates that the victim’s car might be in the water, possibly at the end of Pier 21, where the roads are closed off due to construction.

Sure enough, divers find a late model Ford Focus in the water. Is Ford a sponsor on this show? I’m guessing yes. And Frost is super happy to see that Ford fished out of the water.

Angela and Korsak have a moment, where he asks if everything’s ok, and she tells him her idiot ex didn’t pay $27,000 in taxes and now that’s on her. He offers to loan it to her, interest free, but she turns him down. Is there something brewing between these two? Do they have a history? Remember, I just jump into shows and have decided not to try and catch up, so I’m not sure what their history is.

From info found in the car, the crew determines that Carla Dalton worked at Easton Labs, a pharmaceutical company, as director of clinical research. She was devoted to finding a cure for Huntington’s Disease, because her sister, Bridget, had it. Her sister, who was killed during a boating accident.

In the boating accident, Bridget, her husband Michael, and their son all supposedly died. Not so. Michael faked his and the son’s death and started fresh with new identities. When Michael “died,” he was under investigation for embezzling millions. Fake their deaths, cash in, and start a new life as Doug Pierce, an investment advisor who works from home. Except, he signed the son up for Carla’s drug trials, because Huntington’s is passed down from generation to generation.

The crew goes to find him on his boat, and promptly arrests them. Imagine how surprised his new wife was at finding all this out. You just never know who you’re married to sometimes.

The episode ends with Cailin coming home and Maura treating her like a sister, not a daughter. All is well.

Your thoughts on this episode? Is it just me, or did Cailin and Hope go from being super distant and cold – even after Maura gave them a kidney – to being super friendly and warm?