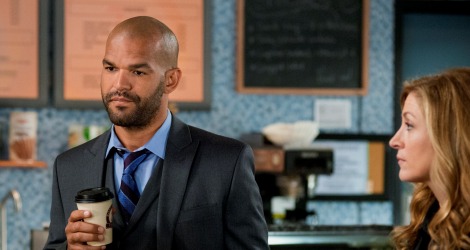 Tonight’s episode of “Rizzoli & Isles” made me cringe at the idea that a teacher would force girls into oral sex in exchange for good grades. It made me sick, and yet it’s no doubt happening out there. These stories are plucked from real life, right?

Fortunately, the episode was balanced out with the comedic story of Jane spraining her ankle while out jogging with Maura, which went something like this:

Anyway, Jane ends up in one of those stylish protective “boots,” and says that Maura thinks “a big boot is the new black.” And how humiliating. She didn’t even sprain it chasing a bad guy. She sprained it jogging.

Romance was brewing in various ways in this episode. Jane and Casey chatting via Skype (although Maura’s right – their relationship DID heat up when he moved to Afghanistan). Frost and the cute barista girl (does everyone get in everyone else’s business around there? Leave the lovebirds alone). And Martinez making a subtle play for Jane (Maura was right – he probably took Jane’s car because he likes her).

But seriously, Jane and Martinez don’t have any chemistry as compared to Jane and Casey, even with this:

“I’d like to buy you a drink, but I think you should take your ankle home and get some rest.” – Martinez
“And that, my friend, is chemistry.” – Maura, after he leaves

Well, not really. No chemistry, in my view.

As for the case this week, it involved a teacher at the high school who taught science and driver’s ed. After he’s mowed down by a car in the dead of night, the crew sets out to solve the crime.

Turns out he was paying way more attention to his female students than the males, and asking the girls to perform oral sex on him in exchange for good grades. To the point where he even staged a provocative photo of one girl online and on his phone, to make it look like she was the one who instigated it. She didn’t. In fact, she was so mortified, she tried to kill herself.

I have to believe that she came out of her coma at some point, especially with those three loyal friends who all said they were the driver on the hit-and-run, forcing the cops to let them all go. Would it work like that in real life? Probably not, but I’m glad it did here.

And what a sick guy to be doing that when his wife just had her third baby. Blech.

Loved the cute bunny pancakes Angela made for Jane and Maura.

“Don’t you wish you could push a button and have men appear when you want them?” – Maura
“Yes.” – Jane