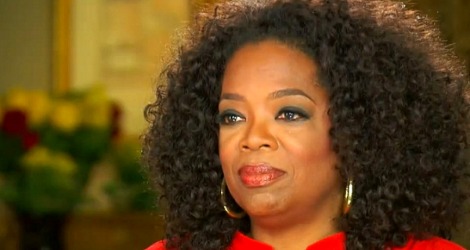 Think Oprah Winfrey is immune to racism? Even the Queen of, well, everything has to deal with clueless people, probably more often than we think.

On a recent trip to Zurich, Switzerland to attend Tina Turner’s wedding (and how cool is that?!), Oprah stopped by the Trois Pomme boutique on Bahnhofstrasse — the third most expensive street in the world — to pick up a new handbag.

“One more time, I tried,” Oprah told Entertainment Tonight. “I said, ‘But I really do just want to see that one,’ and the shopkeeper said, ‘Oh, I don’t want to hurt your feelings,’ and I said, ‘Okay, thank you so much. You’re probably right, I can’t afford it.’ And I walked out of the store.”

Let’s refresh our memory here. Oprah made $77 million last year alone. She can afford that handbag. Though, ok, let’s be honest, who pays $40K for a handbag? Even if you CAN afford it, isn’t that money better spent elsewhere? Like saving a third world country? And yes, I know Oprah is one of the most charitable people on the planet, and yes, I know people can spend their money however they want. But really?!!!

Oprah said of the encounter, “I could’ve had the whole blow-up thing and thrown down the black card, but why do that? But that clearly is, you know… [Racism] still exists. Of course it does.”

The Swiss folks are falling all over themselves to apologize. “[It was] obviously very regrettable,” Zurich Tourism communications director Christian Trottmann said to CBS News. The tourism office tweeted, “This person acted terribly wrong.”

The shop’s owner Trudie Goetz, blamed the whole thing on a “misunderstanding,” saying Oprah got the shoddy treatment because the assistant didn’t recognize her.

But why does she have to recognize her to treat her with respect? Shouldn’t everyone be treated the same?

Leave thoughts below. Did Oprah do the right thing? Or should she have thrown down the Black Card (I would have! She’s way more zen than me).