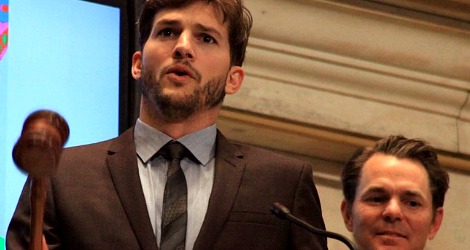 Ashton Kutcher, 35, channeled Steve Jobs to portray the tech genius in the biopic “Jobs,” which opens August 16, 2013. At a press conference for the film earlier in the week at the Waldorf Astoria Hotel, director Joshua Michael Stern Stern said the actor, who already has a skinny frame on his 6’2″ body, lost 16 to 18 pounds so he would look emaciated for the opening scene of the film, where Jobs was already ill and addressed an audience in 2008 to unveil a new Apple product.

“If you see, where Steve is at the beginning of the film, how emaciated he is,” Stern said, “and then Ashton sort of gained weight because we were able to shoot chronologically. It was a tremendous amount of commitment.”

The director added, “Kutcher ended up having to go to the emergency room right before we started shooting just because, you know, to sort of immerse yourself in Steve Jobs is an intense thing and to live in that skin, so I would call him every once in a while and just say, ‘Are you sure you’re okay, you know, in there?'” It turns out Kutcher’s insulin levels were off, and he quickly quit the diet and was soon fine.

Kutcher also tried to physically resemble Jobs and his mannerisms. He acquired Jobs’ loping-like walk and his habit of often going shoeless. Asked about the walk, Stern laughed. “It’s the shoe question.”

“Yeah the walk,” Kutcher laughed. “I wanted to honor this guy and because I knew people that knew him I had pretty good insight into who and how he was and because he’s so well documented I kind of couldn’t afford to not resemble him.”

“I started by learning everything I could about him by reading books and watching video and listening to people tell tales and stories,” the actor mused. “I started studying the entrepreneurs that he admired and listening to the music he listened to and eating the food he ate and walking the way he walked.” Because Jobs went on hikes with his employees, Ashton said he did the same when he was having meetings. He also started walking without shoes or wearing Birkenstocks like Jobs. He’d start by 10-minute walks and as he practiced the walks barefoot, they got longer but came as a shock to his system.

“Listen, doing that kind of thing and making those kinds of changes to your body is a shock,” the actor said. “Your body rejects walking the way Steve Jobs walked because you’re physiologically built to walk the way you walk and every human being on this planet has a unique gait that we could actually measure and quantify and use it as a security code if you wanted to. And your body actually has to rebuild to walk that way. It was uncomfortable, but I think it served a purpose. “

Kutcher went on to say that playing Jobs was a great opportunity for him. “It was kind of a perfect convergence of my personal interests and my craft and also a really complicated person to play. He was an anti-hero. He’s a flawed hero and it’s fun to play flawed heroes because they feel more real. They’re relateable, and it makes you feel better about your flaws.”

Kutcher said he shared some personality traits with Jobs. “Well, one I have is a passion for technology. I went to school to become a biochemical engineer so I know a little bit about engineering, and I have a passion for art and the arts and creativity, and I think that Steve understood and appreciated both of those things.”