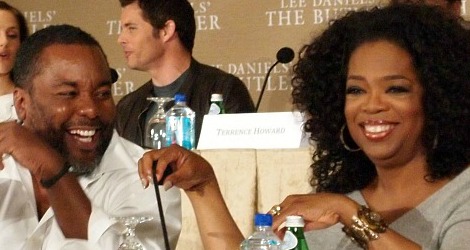 Oprah Winfrey got a huge round of applause from enthusiastic journalists yesterday at the Waldorf Astoria in midtown for the press conference for Lee Daniels’ “The Butler.”

The all-star line-up, who sat on a  stage at the front of the packed room in one of the hotel’s ballrooms, got an enthusiastic reception from reporters. The star wattage from the film present featured the lead, Oscar-winner Forest Whitaker, Oprah Winfrey, rocker Lenny Kravitz, Terrence Howard, David Oyelowo, a pregnant ready to pop Yaya Alafia, Minka Kelly, James Marsden, Liev Schreiber, Jesse Williams and screenwriter Danny Strong.

Mariah Carey, who has a small but prominent role at the beginning of the film, made a fashionably late entrance in a short, tight dress and sky-high Christian Louboutins. She apologized for being late and blamed it on the doctor who she said adjusted the metal studded sling she wore on her injured arm.

The star attraction at the press conference, which lasted over an hour, was Oprah. The room came to a hush whenever she spoke.

The event was primarily a love-fest but there was one tense moment when a journalist made a negative remark about the performances of the actors who played the presidents in the film, cameos that are short but crucial.

Three of these actors – Marsden, Schreiber and Kelly – were sitting on the stage, which made this particularly embarrassing. When the journalist began her criticism, Daniels, Winfrey and Whitaker jokingly clutched each other’s hands.

“And in regards to the presidents, I think they have done a tour de force job. And I think that’s what makes me a filmmaker and you an interviewer. Next!”

There were many highlights during the press conference for Lee Daniels’ brilliant historical epic “The Butler,” which is also a father-son love story  between the titular butler (Forest Whitaker) who serves in the White House during the administrations of eight presidents, and his son (David Oyelowo), a Civil Rights activist who struggles and fights for change during those turbulent historical times.

Other highlights included Lee Daniels rubbing Alafia’s belly, and Terrence Howard demonstrating to reporters how he spins metal hangers as he does in an improvised scene in the film. (He’s pretty good.)