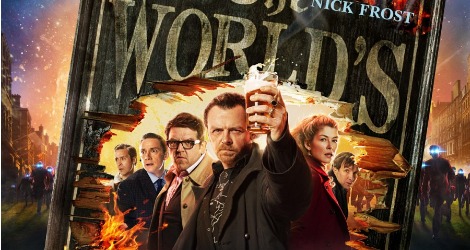 I got the chance to screen “The World’s End,” and can I say how much I adore Simon Pegg? Sure, he’s no day at the beach, but what he lacks in movie star looks he makes up in spades with wit and humor. Was that a bad thing to say?

“Shaun of the Dead” and “Hot Fuzz” fans will enjoy this third installment from director Edgar Wright and actors Simon Pegg and Nick Frost.

The film starts off back in 1990, where a group of teenage lads attempt The Golden Mile, a pub crawl of a dozen pubs (ending at the twelfth pub called The World’s End) in their sleepy little town of Newton Haven with the intention of having at least one pint in each pub. They make it to about #9, but it’s still one of the best nights of their lives. Fast forward some 20-plus years later. All the guys have grown up – they’re fathers, real estate moguls, lawyers, what have you – except for one, Gary King (Pegg), the ringleader of the group back during their school days. He’s still wearing the same tired old shirt he wore back in high school (I’m surprised it wasn’t threadbare and that it still fits) yearning to relive the best night of his life. He cons them all – Steven (Paddy Considine), Oliver (Martin Freeman), Peter (Eddie Marsan) and even his estranged best friend Andy (Nick Frost) to head back to their hometown and attempt The Golden Mile again.

When they arrive, they are pleased to be greeted by Sam (Rosamund Pike), Oliver’s beautiful sister, whom both Gary and Steven are still pining over. As they go from pub to pub, they struggle with maintaining their friendship as they try to reconcile the past and save the future.  Will they make it to The World’s End and finish the Golden Mile?

It’s fun to see Rosamund Pike (a former Bond girl) in a comedy. She was recently cast in the coveted role of Amy Dunne in the thriller “Gone Girl.”

This film will likely draw some comparisons to the other comedy/buddy/sci-fi film this summer, “This is the End” with Seth Rogen. Both star the actors who co-wrote their respective films. Both employ their friends, and both start off as party movies and then turn into sci-fi spectaculars. I found Rogen’s film to be more of a party film aimed at teenaged boys with all its phallic jokes and visuals (of course, my friend’s 13-year old son loved “This is the End”).

“The World’s End” has more of a story – it delves into relationships, aging, reviving lost loves, and lifelong friendships, but is able to pair all of that successfully with the trademark hilarity and humor that can only be found with the Pegg-Frost-Wright combo. This is just a great escapist film – a popcorn movie – the reason most of us go to the movies.

While it’s unnecessary to watch” Shaun of the Dead” and “Hot Fuzz” prior to viewing “The World’s End,” it would be great to watch these films as a triple feature. You’d be guaranteed to laugh for six hours out of your day.