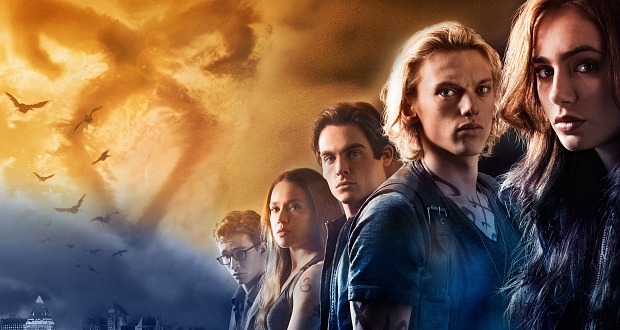 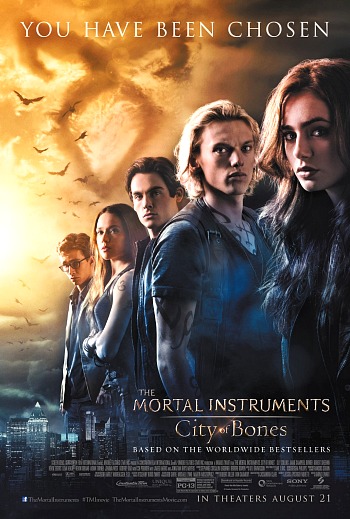 REVIEW: Thank goodness! After a summer of mediocre movies, I’m so glad “The Mortal Instruments: City of Bones” delivered the goods. This movie is exciting, it’s based on a compelling story, and has great special effects. After the end credits rolled, I immediately wanted to watch it again. I also can’t wait for the next movie in the series: “The Mortal Instruments: City of Ashes,” due out in 2014.

Based on Cassandra Clare’s fantasy series, “The Mortal Instruments: City of Bones” centers on Clary Fray (Lily Collins), a New York City teen on the eve of her 16th birthday who can’t stop drawing a mysterious symbol.

During a night out with her best friend, Simon (Robert Sheehan), Clary sees a mysterious trio seemingly kill a man, but no one else can see it. When she sees the “killer” again – a handsome stranger named Jace (Jamie Campbell Bower) – Clary gets a frantic call from her mother (Lena Headey) and hears lots of clatter in the background.

She races home to discover that not only has her mother been abducted, but the symbol Clary keeps seeing is a rune representative of her mom’s former life as a Shadowhunter, an ancient group of warriors that protects humanity from demons.

Jace takes Clary to the Shadowhunter headquarters, a gorgeous old-world type building with high ceilings and lots of innate carvings and details. As Clary delves into a supernatural world full of demons, werewolves, and vampires, she starts to fall for Jace while taking her place as a fellow Shadowhunter.

There’s a built-in audience for this movie – fans and readers of Cassandra Clare’s popular novels. I bought the first book (upon which this movie is based), and am part-way through it. The movie doesn’t disappoint, and includes the book’s intriguing characters (especially Jace), plot twists, and supernatural world. I’m sure much of the set is computer-generated, but that doesn’t stop me from loving the Shadowhunters’ amazing headquarters. This movie completely lives up to the book franchise.

The story and special effects reminds me a lot of the “Buffy the Vampire Slayer” TV series, including the intricate mythos of angels, demons, and other supernatural creatures of light and darkness. The casting is perfect, including Lily Collins, who delves deep to bring the budding warrior Clary to life, and Jamie Campbell Bower, whose dreamy portrayal of Jace made me swoon. Their romantic scenes are my favorites in this movie.

The perfect casting also includes tough-as-nails Isabelle (Jemima West) and Robert Sheehan as Clary’s nerdy, funny, devoted (and smitten) best friend, Simon. As the High Warlock of Brooklyn Magnus Bane, model-actor Godfrey Gao is every bit as magnetic as in the book series.

The soundtrack features an array of performers and songs, including “When the Darkness Comes” (Colbie Caillat), “17 Crimes” (AFI), “Heart by Heart” (Demi Lovato), “Into the Lair” (Zedd) and “All About Us” (He is We featuring Owl City). And who knew Johann Sebastian Bach had ties to the Shadowhunter world?

If I have one complaint, it’s that the end fight scene seems overly long. You start to fade out when a battle scene goes on and on.

Still, I came home and told my 16-year-old daughter that she and her friends HAVE to see this movie. As an avid “Buffy” watcher, I think she’ll love it as much as I did.

Sex/Nudity: Clary and Jace are attracted to each other and eventually share a long kiss. Magnus Bane wears a revealing outfit (blazer, no shirt, boxer briefs) and flirts with Alec. A family secret suggests the possibility of a forbidden relationship.

Violence/Gore: Lots of violence involving Shadowhunters, werewolves, vampires and demons. Weapons include assorted blades and swords, including kindjals, chakrams, and regular hand knives, as well as spears, vampire guns, and more. A group of vampires try to kill or bite Clary and her friends, and succeed in biting one character. The villain and his thugs torture people. A major character is nearly killed and others are seriously injured.

Drugs/Alcohol: A warlock’s party involves drinking. Vampires spike the drink of a human, with debilitating consequences.

Which Kids Will Like It? Kids 13 and older who’ve read the book by Cassandra Clare or who like fantasy movies with supernatural creatures.

Will Parents Like It? This movie is exciting and features lots of great creatures and special effects. I loved it.