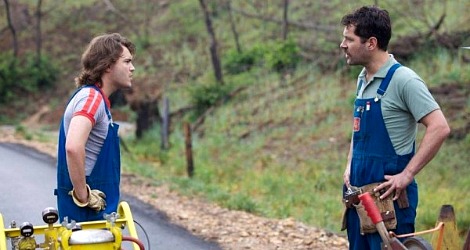 You know you’re watching an indie film when the dramatic arc is barely a blip. “Prince Avalanche” is such a film – a strange slice of life flick starring Paul Rudd and Emile Hirsch.

As they set up camp each night in the forest along the road and face their isolation, Alvin writes to his sweetheart, and Lance talks about his need for a woman. At first, Lance is an annoyance to Alvin, but eventually, the two develop an endearing bond. I usually like quirky movies, but what I didn’t like about this film were the occasional surreal elements. There are moments that are inexplicably dreamlike, and they seem out of place in the middle of this rather quiet story about the relationship between two heterosexual men. Those moments are also never explained.

Still, Rudd and Hirsch turn in excellent performances, as does Lance LeGault in a small but memorable role. (LeGault passed away not long after the movie stopped shooting.) I saw Rudd on Broadway in a play called “Grace” with Michael Shannon and Ed Asner, and I can say that he has much more range as an actor than he usually gets to show on film. This movie allows him to give audiences a hint of some of his other abilities.

“Prince Avalanche” is a remake of an Icelandic film called “Either Way.” Written and directed by David Gordon Green (“Pineapple Express”), “Prince Avalanche” is, he says, about the two sides that we all have to our personalities, although the title apparently means nothing in a literal sense.

If you like indies and count yourself as a fan of Green, Rudd, or Hirsch, you’ll probably want to catch this one, playing in theaters now.