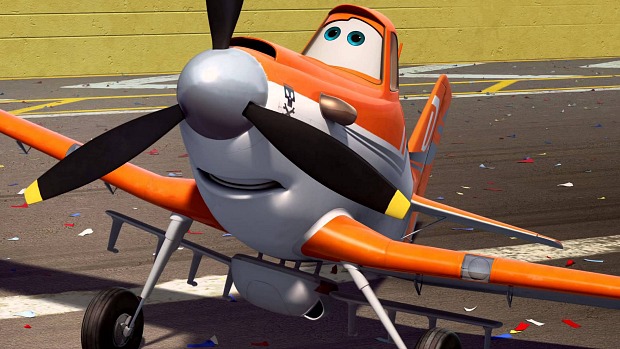 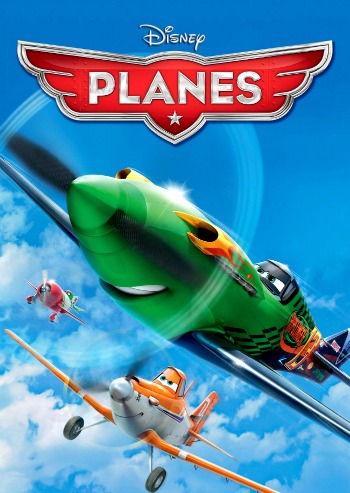 REVIEW: I had such high hopes for “Planes,” DisneyToon Studios’ animated adventure about a little cropduster who dreams of racing. It had everything going for it: a knock-out voice cast that includes Dane Cook, Stacy Keach, Brad Garrett and Teri Hatcher; fun taglines like “A Need for Speed” and “The Flight Stuff”; and the genius of John Lasseter, the brains behind “Toy Story,” “Finding Nemo” and “The Incredibles.”

Sure, the characters are cute and the animation is colorful, but there’s just not a lot of “there” there. Like “Cars” (also a John Lasseter production), “Planes” takes place in a world where all the inhabitants are vehicles. Dusty Crophopper (voiced by Dane Cook) dreams of flying in an annual international air race called Wings Around the World. He asks the legendary and reclusive former WWII fighter plane Skipper (Stacy Keach) to train him for the race, and his mechanic pal Dottie (Teri Hatcher) to prep him.

When they get to the race, it’s clear that three-time racing champ Ripslinger (Roger Craig Smith) has no intention of letting “farm boy” Dusty take the title, so he enlists other planes in the competition to sabotage Dusty’s chances.

Meanwhile, Dusty befriends a Mexican plane called (the much overused name) El Chupacabra (Carlos Alazraqui), who looks out for him during the race. And Dusty has another problem: he has to overcome his fear of heights. I know, right? He’s a plane.

“Planes” is a cute, colorful movie for kids, but there’s not much here to entertain anyone over the age of five or six. You don’t really connect and care about the characters like you do in other Lasseter movies (shall I name them again? “Toy Story,” “Finding Nemo,” “The Incredibles,” and “WALL-E,” to name a few).

In the theater where I saw this movie, there were a few scenes where little moviegoers laughed out loud, but we’ve seen this “underdog going for the impossible dream” so often that by the time we get to the predictable ending, anyone over that magical age of five or six has probably dozed off.

There’s also a ridiculous number of cultural stereotypes which the filmmakers attempt to mine for laughs (i.e. Mexicans who love mariachi and lucha libre) that you feel like they’re basically phoning it in. Where is the originality and character development found in other Lasseter films?

I will say this, though: Incredible attention was paid to the planes’ details. For example, Dusty is based on an Air Tractor AT-402 powered by a Pratt & Whitney Canada PT6A-15AG at 680 horsepower (I didn’t know this; I found it on IMDB.com’s trivia page for the movie). This year marks the 50th anniversary of the PT6A engine and the 3000th Air Tractor aircraft delivery.

Bravo and Echo are F/A-18F Super Hornets, numbers 113 and 210 respectively, of VFA-103 “The Jolly Rogers.” Val Kilmer and Anthony Edwards were cast to voice them because they both appeared in “Top Gun” piloting those planes. Also, Bravo and Echo’s flight helmets are the same design as “Goose” and “Ice Man,” the characters Edwards and Kilmer played.

The other characters are based on real-life planes, too. Skipper is a Chance Vought F4U Corsair, and Bulldog is a De Havilland DH.88 Comet. Of course, all this is lost on the film’s target audience – those five- and six-year-olds. Airplane enthusiasts who live for that stuff will likely never see this movie.

This is the first film from DisneyToon Studios to be released theatrically in the United States since “Pooh’s Heffalump Movie.” “Planes” sets the bar extremely low, so let’s hope next year’s “Tinker Bell and the Pirate Fairy” fares better.

Sex/Nudity: Chupacabra and Rochelle fall for each other, and he’s covered in kiss marks in one scene. Dusty and Ishani first with each other. A male plane says “look at that propeller” while ogling a female plane’s backside.

Violence/Gore: Dusty gets caught in a storm and goes underwater, and also flies through a tunnel with a train approaching head on. Ripslinger and his crew injure Dusty. A flashback shows a squadron of fighter planes crashing into the sea or exploding in flames.

Drugs/Alcohol: A plane is disqualified from racing because of a fuel enhancer.

Will Parents Like It? There’s nothing too offensive here, but “Planes” is formulaic and predictable.