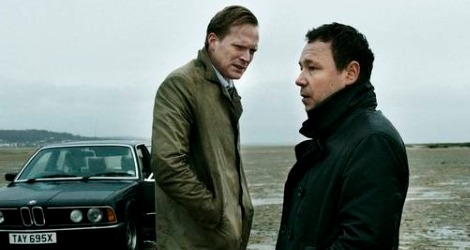 Finally, a cop movie that relies more on human tension than car chases and flying bullets. Leave it to the Brits.

In “Blood,” Paul Bettany and Stephen Graham play brothers in a police family headed by the always excellent Brian Cox as a revered officer who is now beginning to suffer from Alzheimer’s disease. In other words, the brothers have big shoes to fill.

When the brothers become embroiled in an impulsive violent crime of their own, the drama becomes intense as they try to hide it from their colleagues.

Both Bettany and Graham offer up excellent performances, and they anchor a film that isn’t perfect but is, ultimately, a very satisfying ride that builds to a fever pitch. As another cop, Mark Strong also shows off his formidable acting chops.

The title of “Blood” is as much about the familial dynamics that affect the narrative as the shedding of the red liquid in violent death. Of course, the scenario of a cop losing it in the field is hardly a new one, nor is the generational lineage in the profession. So, there’s nothing really new here, but for American audiences, the British police movie is a different animal with more substance than flash. That alone is welcome in my book. The only problem is that the accents are a bit difficult to understand at times.

All in all, “Blood” is a well-acted, entertaining drama that is worth a look if you like the genre. It was written by Bill Gallagher and directed by Nick Murphy, and it was shot in the mysteriously misty part of Liverpool called “The Wirral,” which I visited a few years ago. The movie opens in the U.S. on August 9, 2013.