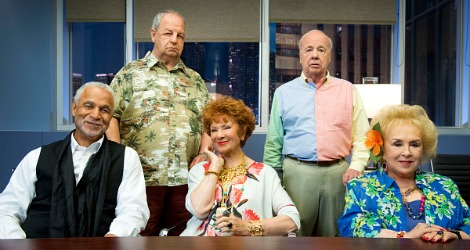 Good grief! It’s an embarrassment of veteran TV actor riches! Marion Ross, Tim Conway, Paul Dooley, Doris Roberts and Ron Glass guest-starred in this episode of “Major Crimes,” which finds all of them living in a rundown apartment complex. And their landlord just committed suicide. Or … did he … ?

Provenza is feeling sympatico with the oldsters, since he’s been at the shooting range every week trying to shoot well enough to pass the test. But every week it’s the same – his test gets stamped DNQ for “Do Not Qualify.” If he doesn’t qualify by next Friday, it’s a desk job for him. And we all know, that just can’t happen to the old coot.

Meanwhile, the guy who died, Ed, is the nephew of the guy who used to own the retirement village. He inherited it in the will. Or … did he … ?

The Major Crimes crew determines that it wasn’t a suicide after all. Ed died from anaphylactic shock due to an allergy, and then someone propped him up in front of an open oven to make it look like suicide.

Could the oldsters have done it? After all, they all worked on the same crime series in the 1970s – “Prognosis Homicide.” And they all hated Ed. He drained the pool and the power always conveniently failed during “Dancing With the Stars.”

Provenza comes up with a theory: The gang of retirees transformed the complex into their retirement home, but when evil Ed inherited the place, they off’d him.

A guy – Agent Evans – with red hair and a mustache the oldsters nicknamed Scarface was there the night Ed died. Or … was he …? At the station, Scarface says Ed was a miserable, meanspirited two-faced jerk. “I’m gonna be totally honest here,” he says. “If you’d known Ed Dagbey, you’d know that killing himself was the only decent thing he did his whole life. What can I do to make this thing a suicide?” (Someone remind me why he wanted it to be a suicide.)

The crew also found a bag of money in Ed’s apartment. Turns out he was helping to smuggle fake designer bags into the country – bags that cost $10 in Europe but went for thousands in the U.S. (which I never understood – what bag could possibly be worth thousands of dollars unless it’s made of gold?).

But Agent Evans wasn’t at the complex the night of the murder. He was singing karaoke at a bar. And dancing. Singing and dancing to “The Time of My Life” from “Dirty Dancing.” Forever denuding the memory of Patrick Swayze and Jennifer Grry.

While re-enacting the crime, the crew learns that Vera (Doris Roberts’ character) didn’t have her glasses on that night. And three months ago, someone phoned for an ambulance from the Shangri-La. The oldsters end up pleading guilty to various portions of the plan, which involved Ed taking brownies from their weekly party and then dying from a nut allergy from them.

Still, there’s just not enough evidence here, and the oldsters have 378 collective years of good behavior and no priors. So they end up getting three years of house arrest (a dream come true!). And they’d also like to be judges for the Emmys. The judge will consider it during sentencing.

Here’s the ep clincher: Provenza steals Vera’s glasses and wears them at the shooting range. He shoots a perfect target, and ends up getting that coveted “Qualify” stamp of approval! And really? He didn’t think his eyes might be the problem before?

The Rusty story this week involved him pondering how to tell Chris he needs space. But she gives him a wrist band with the word “home” engraved in silver. “Home is a valuable thing,” she says. “It’s what you’re fighting to keep.”

Sharon tries talking to Rusty about it, but he says he’s not a kid, and he’s seen way too much to ever fit in with the kids at school. He also scoffs at Sharon’s idea to have him talk with a professional. Yeah, he’s probably sick of all that.