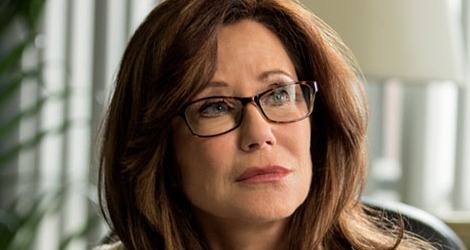 “Stabs one, clubs the other … what’s next on the hit parade?” – Provenza

Was this week’s episode of “Major Crimes” sponsored by Apple? Because it sure seemed like the whole thing revolved around iPhones and iPads. At least, they looked like iPhones and iPads to me. I guess they could have been other brands.

In fact, this episode was an interesting meld of technology and murder, with cellular and wifi devices figuring heavily into the plot.

The story centered on a kid who tried out for a reality show called “Poster Boy,” and when he was rejected, he ended up going on a killing spree. The first part juxtaposed scenes of the kid killing his roommate, lugging him into the bathtub, and attempting to cut his head off. Only he was interrupted by a call from his grandmother, whom he talked to like nothing was wrong. Then he proceeded to make a pizza. With blood on his hands.

He also killed another girl and stuffed her into the sofa bed, which DDA Rios – we know how much she loves the bloody stuff – proceeded to sit on top of until it was determined there was a body in there. Surprise!

Frankly, I don’t know how cops do it, dealing with all that carnage and then not having nightmares about it. They must do some super-duper special training to deal with it.

There were a couple things I didn’t get about the crime. The kid – Brandon North (Chris Wood) – left bloody fingerprints all over the house, but Provenza said they didn’t match up with any criminal records. But wouldn’t those prints have been in some database somewhere?

He also left a lock of his hair in the trash. But the team didn’t know his name until the “Poster Boy” casting people figured out he was one of the rejects after seeing the security footage at the ATM machine. Couldn’t they work some DNA magic on that lock of hair?

He also told his grandma he’d just returned from Iran, and then we never heard anything else about it. That seemed like an odd throwaway remark to never bring up again. Maybe he never went to Iran and he was just making it up.

Sharon hated the fact that the cops released a video where the show’s casting people told him he was too short and not buff enough for the show. Because as Sharon said, all he’s interested in is being on TV, and he’ll get more of that by killing more people.

I knew things wouldn’t go well for the girl who sent his picture to her friend (on an iPad!). The friend wrote back after seeing Brandon’s picture on the news, and told her he’d killed two people. Of course, the girl never saw that, because Brandon saw it first and promptly killed her.

And here’s a note to criminals: don’t search for yourself or your victims on the web. The cops will hunt you down! Even if you re-route it through the Netherlands. I guess Sharon wanting to serve warrants on every search engine on the web was a subliminal message about the government spying on us. The Major Crimes team couldn’t access that info willy-nilly – they had to do it legally and serve warrants.

Was Kris (yes, I realize I’ve been spelling it Kris and Chris – I think it’s Kris) right to rat on Rusty about the letters? I have mixed emotions. He told her that in confidence and swore her to secrecy. On the other hand, those threatening letters are nothing to play around with. I guess I’m leaning toward the side that she was right to tell someone about them (if only it had been Sharon instead of DDA Rios!).

I’m not sure what the ending meant, when Sharon said, “Whatever happens next, know I love you,” before they went into the chief’s office to deal with the letters. So maybe they’ll want to put Rusty in witness protection.

Sharon is smart. First she figures out that Brandon went to the “Poster Boy” winner’s home, because his grandma said he was “a homebody.”

Then she played on his lust for fame when they were face-timing at the end (on an iPhone!). “You are famous now,” she said. “The world works a little bit differently for famous people. People want to know everything about you.”

I knew he was going to kill himself, just by how things were going down at the end. Did you guys have that feeling too?

Sharon felt bad that Brandon killed himself, but I’m kind of with Flynn when he told her, “None of us got hurt, and you spared the victim’s families from a long and nasty trial.”

What did you think about the end, where we saw the letter-writer addressing a letter to Sharon instead of Rusty? Maybe he ended up kidnapping Rusty.

That’s a wrap for this first part of season two. The finale airs Nov. 25, 2013. And why in heck do they make us wait three months for one finale episode of the season? Or are there more eps after that? IMDB says just one ep in November.