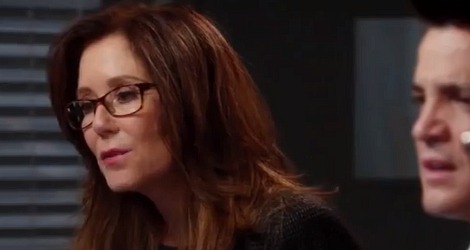 This week’s episode of “Major Crimes” revolves around a 19-year-old girl, Briana Mathis, who died after she was pushed out of a car. But that’s just the tip of the iceberg.

The episode begins with a deal. Major Crimes is trying to strike a deal with a seedy character named Jason Goss, who claims to have a whole bunch of info that would help solve past crimes and prevent future homicides.

But DDA Rios wants something more – that’s when he gives them a tidbit about the girl being pushed out of a car – a brand new silver S-Class Mercedes.

But in court, the judge is not at all happy. I love this judge. He’s not going to let this guy get off with any less of a sentence than he deserves. In the judge’s chambers, Capt. Raydor says, “We believe Jason Goss is part of a larger criminal enterprise. If he doesn’t provide the promised info, his deal goes away.”

“Why isn’t he facing the death penalty?” the judge asks. “So I’m supposed to accept this plea because you guys haven’t done your job? … And don’t even think about shopping for another judge. Then you’ll find out what I’m like when I’m really mad.”

Tao deconstructs the 911 call. It was made 15 minutes after Briana’s death – from an office environment at midnight. During a full body scan, a mechanical object is detected in Briana’s body – it’s a GPS locator chip. She was tagged and being tracked.

Agent Shaw tells Major Crimes that the FBI apologizes for keeping them in the dark, but they’re holding a man who’s part of a bigger organization involving a psycho named Jerry Stone who wanted to move up from the sex trade.

During the discussion, it’s revealed that Shaw promised Briana protection. He basically sent her into that situation saying he wouldn’t do it if he didn’t think he could absolutely protect her. The FBI is the one who injected her with the chip. “If anything even starts to happen to you, I will be there,” Shaw had told her.

“I guess I’m pretty luck you guys picked me to help, huh?” Briana had said.

Well, not so lucky, because she ended up dead. Rusty hears all of this and starts looking nervous at the idea of witnesses dying because of promises the FBI can’t keep. As he and Chris look at the photos of Briana, he gets testy at Chris, who says it’s disgusting that Briana was a prostitute at 19.

Buzz says they should move away from the photos, because “the pictures can be upsetting.”

Meanwhile, Provenza and Tao go to check out the home of Briana’s boyfriend, Cory Stark, but they can’t exactly knock on the door without probably cause – especially if there’s no Mercedes in the garage.

Back at the station, Raydor gets Goss to reveal that the Mercedes was indeed Cory’s, so she calls Provenza and gives him the go-ahead. When they enter the house, they find Stark dead on the floor in a puddle of blood.

Rusty is further freaked out by the fact that Briana’s boyfriend is dead. Raydor tells him, “If you hang out with criminals, you’re eventually going to become a witness a suspect or a victim.” Tough love.

Ok, here’s where this episode threw me. Raydor tells Goss and his lawyer that they took Stark into custody three hours ago. She produces his phone and car keys to the Mercedes. Manslaughter is off the table, and the best they can do now is first-degree murder.

Is Major Crimes legally allowed to lie to get what they want? Isn’t there some kind of law against that?

Based on that lie, Goss confesses (and believe me, I’m not trying to cut the guy any slack). “Jerry Stone was the one who gave me my orders to off Briana,” he says. “With the cooperation of Cory Stark, who was driving, I pushed her out of the car.”

After Goss is dragged out of the courtroom screaming about being lied to, Rios takes it up with the judge, saying that if the judge had allowed the initial manslaughter plea, Stark wouldn’t have died.

“You’re referring to this Cory Stark guy?” says the Judge. “Whose girlfriend was pushed out of the car he was driving? Hold on, I’ll get you a hanky.” Told you I liked this judge.

The episode ends with Rusty showing Chris the letters sent to him because he’s a witness against Philip Stroh. The letters aren’t signed, and he’s up to 11.

He tells Chris he hasn’t shown them to anyone, not since the first one. “I would lose everything,” he says. “If my mom ever came looking for me, we’d be separated forever. I’d never see my mom again. After seeing what happened to Briana, it made me realize that … she was a witness, Chris. Not only was she murdered, but they off’d her boyfriend too. We can stay friends, but I can’t see you outside of school anymore, and even then we have to watch it.”

Chris leaves crying. But is that the real reason Rusty showed her the letters and “broke up” with her? Or is it because he’s gay, as some of us have surmised?

Loved it when Agent Burns told Raydor, “Chief Johnson would have found a way around this.”

And Raydor said, “On the other hand, she never would have reported to you.”

One more episode left! It doesn’t seem like they’re going to wrap up the Rusty case anytime soon.

Your thoughts on this episode? Someone clue me in on Rusty’s comments about his mom. I haven’t watched season one yet, and just jumped right into season two.