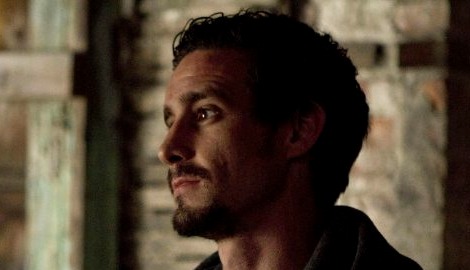 Jury’s still out on “Low Winter Sun,” but here we go with episode two. Oh, I just love looking at headless bodies, even peripherally.

As for the title, at the Brendan McCann crime scene, Dawson says they all have to be on the same page with the press. That is, tell them nothing. “This is a grade A goat rodeo,” he says. “Stonewall ’em and keep moving.” Odd thing to say for someone in inner-city Detroit, but whatever.

The team heads to Brendan’s house, where Frank tells Joe to go home. He’s too close. This was his partner, after all (and based on last week’s ep, we all know there was no love lost between Joe and Brendan).

The drug dealers: So far, the most interesting thing about them is Sprague Grayden. And the fact that Joe has a connection with them, and goes to the bar to tell Damon never to call him – not at the station, not anywhere. “If you call me again, they will find your oily ass at the bottom of the Rouge River,” says Joe. “Pigs,” Damon says after Joe leaves.

At home, Joe’s mom says he should be running the department by now. “Brendan’s dead,” he tells her, after spouting some religious platitudes and before he takes a little sniff of something. So apparently, they’ve discussed the fact that maybe Brendan needs to be out of the way?

When Frank finds a cell phone at Brendan’s and calls the voice mail, there’s a message from Katia – Frank’s Czech lover. And back at her place, there’s blood on her walls. Hmmm… where’s Katia? More below.

“Low Winter Sun” is no “The Wire,” but the acting is top-notch. And it’s kind of neat to see a TV show set in my home state of Michigan, and in the economically war torn city of Detroit. I totally get the guy who wanted that extra $2.50 for tearing those pipes out. Things are desperate there.

The FBI and the homicide department – will they ever get along on any show ever? Boyd didn’t seem all that thrilled about being at the autopsy with Frank.

The bodies are dropping left and right on this show. And yuk – apparently, if you die and your body lies around for even a short while, the dogs will use you for dog food.

Joe showing up at the autopsy – maybe he wants to project innocence on his part. But the coroner says Brendan was put into the river AFTER he died, and that the water in his lungs was chlorinated, i.e. “good old Detroit tap water.” How long will it take people to piece together who murdered him?

You go, Dani! Loved it when she told the store owner to show her some respect. “I am not your wife and I am not your sister…” And then when she and Joe went at it at the station. Love a girl who stands her ground.

“Hey, everybody, put your valuables away, the white folks is here.” And “We can’t have that [drugs] around the little ones.” Yes, Detroit has families too. Not just drug dealers. Though in this case, the same people are in both groups.

The headless victim was Boyd’s confidential informant on McCann’s case. “As far as I’m concerned, Joe Geddes IS the investigation,” says Boyd. Which, of course, leads to Frank.

I would not want Mark Strong beating me up. It’s a wonder he didn’t accidentally kill Joe. Yeah, let’s just have another dead body on this show. That’ll help. Joe says he drove Katia across the border. He saved her life, he says. Brendan wanted to kill her. Ok, so let’s burn her house down then. Make the Detroit firefighters work even harder.

Thoughts on this ep? You watching “Low Winter Sun”?