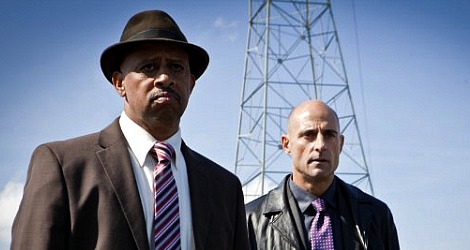 And the backdrop of Detroit – in my backyard (if you call five hours south of me my backyard) – gives it a desperate feel.

The story, which is based on a 2006 British miniseries of the same name (must all our good shows come from the Brits?!), begins with two cops – Frank Agnew (Mark Strong – about time they gave him his own show) and Joe Geddes (Lennie James, whom I mostly know from playing “147” in “The Prisoner”) orchestrating the killing of a fellow cop, Brendan McCann (Michael McGrady) by first drowning him, then cuffing him to the steering wheel of his car and sending it into the water.

“Folks talk about morality like it’s black and white,” says Joe. “But you know what it really is? It’s a damn strobe … all we can do is try to figure out how to see straight enough to keep from getting our heads bashed in.”

That’s the kind of writing that reminds me of “The Wire.” There’s also some really interesting camera angles, which reminds me of just about every British series I’ve ever watched.

Cut to the next morning, and two guys are waiting outside McCann’s house. They bust into the house, ask  the guy in there, “where’s the coke?” and then shoot him. A couple of times. They want to make sure he’s dead.

At the station, we learn that Frank lost his wife three years earlier, and he’s been edgy lately. That’s when Simon Boyd from Internal Affairs shows up. I’m immediately impressed by the fact that he’s Det. Rick Messer from season two of “Damages.”

When he starts poking around, Frank and Joe get nervous, to the point where Frank goes into the bathroom and throws up. Here’s where I notice that this cop shop is super old school. There is just nothing new about this place, which is not surprising since Detroit just filed for bankruptcy and is in ruins. It’ll be interesting to see how the show plays that out.

Brendan’s computer hard drive has been scrubbed clean, and Joe is worried about being sucked into his partner’s corruption (I’m guessing that ship has sailed).

Things end with Brendan’s car being fished out of the water and Frank identifying him. There’s a little kerfluffle between the chief and Boyd, the Internal Affairs guy, but “I’m not leaving,” says Boyd. No one likes the IA guys.

Frank and Joe have a little argument at the crime scene (not smart, guys), and the drug guys are looking at the scene from afar and see Brendan’s body pulled from the car.

Oh, and there’s another body in the trunk with the head, hands and feet cut off. The chief tells Frank, “This is yours. I’m not gonna trust it with anybody else.”

Something tells me that’s not a great idea, seeing as Frank’s the one who killed Brendan.

What do you guys think of “Low Winter Sun”? Will you keep watching?