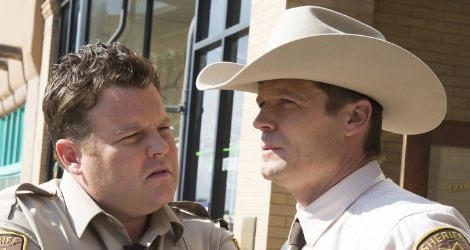 This week’s episode of “Longmire” revolved around the much touted election day for sheriff. Will it be Branch Connally or the incumbent Sheriff Walt Longmire?

In last week’s ep (which I didn’t have time to post), we finally got to meet Dr. Bloomfield and he wasn’t at all what I expected. Doc Bloomfield turned out to be a Japanese American man with chewing tobacco in his mouth, a country twang, and cowboy boots. There were so many juxtapositions there I thought I was travelling with Doctor Who! It was nice to finally see Doc Bloomfield, hope we see more of him in future eps. Westerns need more Asians that aren’t doing laundry or working on railroads, in my opinion!

In this week’s ep, Walt’s supporters are partying it up at Lizzie’s. Ferg asks Cady to dance and everyone is surprised how light on his feet he is. After the party winds down, it’s just Walt and Lizzie and a big mess from the aftermath of the party. They kiss and things start to get hot and heavy when Walt pulls away (again), making excuses about tomorrow being election day and he needs his rest.

He leaves and is almost to his truck when he pauses. Next thing you know, the sheriff busts back into Lizzie’s, tossing his hat and jacket on top of the aftermath of red solo cups and empty plates as he takes Lizzie into his arms and kisses her until she’s senseless. Oh my. Can I get a glass of ice water, please?

The next morning, Cady stops by her dad’s house to look for him but he’s nowhere to be found so she heads into town. She stops by the station but he’s not there either. Ferg starts to fawn on her but she tells them she promised she would drive out to the reservation and drive anyone in who wanted to vote but had no transportation.

Over at the Red Pony, Henry goes into his saloon to open up and finds Bob, passed out drunk on the floor. Apparently, he got locked in the restaurant the night before and would have called his girlfriend but she broke up with him (go figure).

Vic gets a call from Ferg who is manning the station’s phones while Ruby is running the polling place. He sends her out to investigate a car accident that was called in. When Vic arrives, she finds not one, but two wrecked cars and no drivers. She sees some lugnuts and a tire iron on the side of the road and figures someone was changing a tire. She sees something off in the distance and goes to investigate and is shocked to find Cady in a ditch, all bang up and barely breathing. She immediately calls for an ambulance.

Cady is rushed into surgery while Walt sits in the waiting room, the election the furthest thing on his mind.  Memories of a baby Cady flood him as Lizzie arrives. She goes in to comfort him, but he heads out to get some fresh air, leaving Lizzie confused.

An emotional Ferg has been doing some detective work and he and Vic go in search of the culprit who did this to Cady. Unaware of Cady’s state, Branch jokes around with Ferg who spits fire at him. Once Vic tells him what happened to Cady, he heads to the hospital also.  Even though they dislike each other and are running against each other in the election, he sits down next to Walt, a united front of support for Cady.

Vic and Ferg’s investigation lead them back to Bob Barnes and his son, Billy. When Walt goes to their trailer, a banged up Billy answers the door. He confesses to hitting the car, not knowing it was Cady. Walt throws Billy in the klink and tells Vic to charge him with anything and everything she can think of. Branch is looking over Cady’s car, which is in impound and still being investigated. He breaks down in tears and slides down to the ground, crying. He wakes up the next morning, having slept in the back seat. He gets a call from Jacob Nighthorse telling him he lost by 17 votes and berating him for missing a dinner last night with his supporters. Branch tells him off and returns to examining the car.

Bob Barnes stops by Walt’s, confessing to hit Cady’s car, not Billy. Walt is about to show him his fist but instead takes him to the car, telling him to climb in. It’s a tight squeeze for Bob and they both know Bob is lying, but Bob pleads with Walt to arrest him instead of his son, since he was the one to call his son to come get him at the Red Pony the night before. Even though he’s a drunk, he’s still a dad looking after his kid. “My life is already over, Walt. I wasted it. Don’t let me ruin my son’s life too,” he tells Walt.

Walt takes Bob in, much to the others surprise, and lets Billy out. Bob and Walt share a knowing glance between fathers, and that’s the last we’ll probably ever see of the town drunk Bob Barnes.

Branch takes Cady’s flat tire to a mechanic to find the source of the flat. There’s no nail or screw, but Branch find a puncture hole that sure looks more intentional than accidental.

Walt insists he and Henry perform a sacrificial ceremony to hopefully right the wrongs and see Cady through a successful recovery.

When did Ferg start crushing on Cady? They made it sound like he’s been in love with her forever, but this is the first time we’ve seen evidence of it. It seemed out of character for the Ferg.

Now that Branch has lost the election, do you think he will get in line and follow Walt?  Probably not, as it is more interesting if he doesn’t.

What did you think of this episode of “Longmire”?