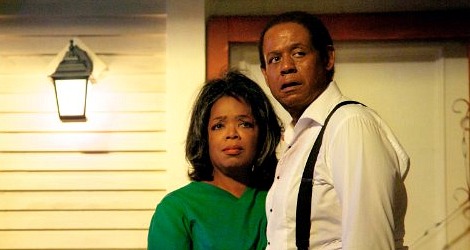 [Editor’s Note: This story comes to us from Shannon Shelton Miller, who participated in a press conference at the National Association of Black Journalists’ annual convention earlier this month, where Lee Daniels, Forest Whitaker and journalist Wil Haygood  discussed their film, “Lee Daniels’ The Butler.”]

Haygood approached them and asked if they needed help. No, they said. They were crying because they planned to vote for Obama, but couldn’t understand why their fathers had stopped talking to them for supporting a black candidate.

“They were judging Obama by the content of his character and not the color of his skin,” Haygood said. “That was very powerful. I made up my mind right there that Obama was going to win. I just got a feeling in my gut he was going to win because I felt the emotion carried from town to town, city to city, state to state.”

Haygood then decided to search for a potential interview subject whose life encompassed working in the White House during the era of segregation to witnessing the election of an African-American president. He found his subject in Eugene Allen, a man who started his career in the White House pantry in 1952 and served eight presidents, from Harry Truman to Ronald Reagan, before retiring as maitre ‘d, or head butler, in 1986.

Allen’s life, chronicled in a Washington Post story published on the eve of the 2008 presidential election, serves as the framework for “Lee Daniels’ The Butler,” a historical biopic already gaining buzz for its Academy Award potential.

Whitaker, Haygood and director Lee Daniels shared the story behind the film and Daniels’ screenplay during a question-and-answer session with reporters at the National Association of Black Journalists convention August 3 in Orlando, Florida.

Daniels takes elements of Haygood’s story, which details Allen’s interactions with the presidents through pivotal moments in American history, and crafts a tale juxtaposing the lead character’s relatively stable life for an African-American in segregated America with the increasing involvement of his son, Louis (David Oyelowo), in the civil rights and black nationalist movements.

“At its core, it’s a father-son love story,” said Daniels. “The civil rights movement and what was going on at the White House just happened to be in the backdrop of this love story between the father and the son. Then I found as we were shooting that this was getting heavier than I thought it was going to be.”

Those intense scenes include the vivid juxtaposition of the butler, Cecil Gaines, serving guests at a lavish state dinner in the 1960s while Louis and other young freedom riders escape from a firebombed bus in the South, or remain steadfast while seated at segregated lunch counters, despite the presence of counter-protestors who spit and spray ketchup in their faces or dump hot coffee on their heads.

The love between Cecil and Gloria also permeates the story, a chemistry Whitaker said he and Winfrey worked to generate throughout filming.

“We were friends and wanted to work together,” Whitaker said. “While we were working on the movie, we did have an intimacy that we carried with us. I would be working and sitting in the trailer getting ready, and she’d come in and rub my back.”

“Then she’d talk to me and we’d hold hands,” Whitaker said. “The intimacy was really important to show this beautiful relationship.”

Although the historical details and presidential depictions are likely to gain the most attention from filmgoers and reviewers, Whitaker said Daniels’ attention on Gaines’ personal life drew him to the role.

“It was a story that was dealing with love of a family,” Whitaker said. “It had an intimacy that allowed us to see love in this black family in a way that I thought was very unique, very special, very honest and very true.”