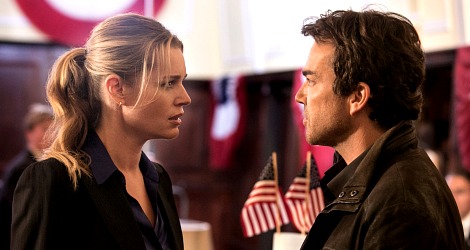 Hoo boy. What did we learn in the season one finale of “King & Maxwell“? Well, lots. For one, thank goodness Michelle isn’t going back to the Secret Service. I knew she wouldn’t. I mean, she could have, but then they’d have to change the title of the show to just “King,” and that’s not nearly as catchy.

We also learned that Rigby isn’t as much of a douche as I thought he was. And we learned – sort of, but not really – who was behind the murder of Clyde Ritter.

The opening scene was the usual frolickry. Michelle is pretending to be a massage therapist, about to start working on a fat guy. But then Sean comes in pretending to be her boyfriend who just got out of jail, and they get in a fight, at which point the guy runs out of the room and Sean collects their client’s watch from the guy’s things.

Then Michelle gets a call from the Secret Service, and things go dark and stay dark for pretty much the whole episode. Not much of the usual lighthearted banter here, and then … well, we’ll get to that at the end of this recap.

About going back to work at the Secret Service, she tells Sean there’s a reason she became a rower. “I like straight lines going from here to there. That’s how I’ve lived my life, and this was never part of my life.” Or something along those lines.

Sean says they shouldn’t keep secrets from each other, and they agree not to.

Cut to Sean dressed as a janitor at the FBI, and he’s using his stolen key card to break into the evidence room. Is there NO security at the FBI? I mean, really.

Later – like the next day – Edgar is bringing the mail in. We know this because he says boldly, “The mail has arrived!” Michelle and Edgar think there’s a bomb in the box. It turns out to be the evidence box in the Clyde Ritter case.

“This needs to go back to the FBI,” says Michelle. “Possession of stolen evidence is a crime!” When did she get so law-abiding? I guess when she started thinking about working for the Secret Service again.

“You’re such a buzzkill,” says Sean. He starts going through the evidence, and Edgar notices that one of the Secret Service pins is missing from a plastic bag. Sean calls Bob Scott, whom I’ve always thought was a little shady, and this episode proved me right.

When Sean goes to meet him, Bob isn’t interested in helping with the case. Then his truck blows up. Like to smithereens. We think he’s dead.

Everyone shows up at the scene, including Rigby (isn’t he supposed to be a boss? why is he on every crime scene?). He says someone dressed as a janitor used a key card to gain access to the evidence room, and would they know anything about that?

“Someone wants me to find the truth,” says Sean. Back at the office, he asks Edgar to stitch together the videos from the Ritter murder.

“What am I looking for?” asks Edgar.

“Anything that makes you say ‘Hot Damn,'” says Sean.

Benny checks out the prosthetic arm and uses an old counterfeiter’s trick to get the serial number off the arm. It leads Michelle and Sean to a movie prop house, where they pretend to be attorneys for a client in a case involving recalled prop guns that discharge improperly. Do NONE of these people ever ask for IDs? The guy lets them right in, but another guy seems overly interested in them.

Back outside, a spray of bullets from a car nearly kills them. But private eyes on TV never get shot, right? Keep reading…

Sean thinks Brady Ritter is next, because he’s running on his dad’s platform and is announcing his candidacy tomorrow. Leading the security team is Joan Dillinger (Catherine Bell), from a few eps back. She and Sean had a thing.

From the videos Edgar stitches together (was this not done when the case was active?), turns out that Brady Ritter was wearing one of the all-access Secret Service pins, but he ditched it as soon as he got inside. He was a drunk at the time and sold it to someone who ended up killing his dad.

Michelle takes the evidence box and says she’ll drop it off when she goes for her interview. Sean begs her not to tell Rigby anything. “You’re the only one I can trust,” he says.

Michelle leaves the box on Rigby’s desk, and learns that the toxicology report just came back on Bob Scott. He had Temazine in his system, a drug used in the former Soviet Union for brainwashing.

Michelle goes for her Secret Service interview, but instead of going in, she goes upstairs to the archives and checks out Temazine in a file (which I didn’t really understand what she was looking for here). And are there NO security protocols at the Secret Service? People just wander in and out of areas that should be protected!

When she learns that Sean left and took his gun (!!!), she tells Edgar to hack her into the guest list for Brady Ritter’s announcement. Which he just barely does – she has to ask the clerk to check twice.

One of Joan’s guys detains Sean, but Michelle arrives and punches the guy out. They learn that Bob Scott was behind the Clyde Ritter shooting, but why? In the announcement area, shots are fired, but turns out they were recorded shots. The real shooting will take place on the escape route.

Joan takes Brady to the limo, and Michelle recognizes the driver from the movie props place and tackles him, putting him in an awesome thigh hold. There’s a big shoot-out in the underground hallway, and Sean is shot. He yells at not-dead Bob Scott and asks who he’s working for.

“The truth is only gonna scare people, Sean, and you know what they say. If it ain’t broke…”

At this point, Sean blinds Bob (just like he was blinded on the day Clyde was murdered) and then grabs one of the downed guys’ guns and shoots him. Outside, Sean tells Brady, “Back when I was in the Secret Service, my word was ‘duty.’ Then I became a lawyer and ‘law’ became my word. Then I became a P.I. and my word is ‘truth.’ It’s not always what people want to hear … so why don’t you tell me the truth, Brady? Who’s really behind the murder of your father?”

He says he knows that Bob Scott offered to buy Brady’s pin, and that would be Brady’s own money, “not doled out by a disapproving father, and you took it.”

Brady says he didn’t know they were going to kill him. He thought with all the high rollers in the room, there’d be a robbery because there were millions in jewelry. He’s spent the last eight years trying to make up for what he did, and they’re not going to stop him now.

At this point, we surmise that Rigby is the one who sent the evidence box to Sean. “Crazy how that evidence box ended up on my doorstep,” says Sean. “Who would have done that?”

“No idea,” says Rigby. “I bet you lost a lot of sleep over the Clyde Ritter assassination.”

The episode ends with Michelle getting a call from the Secret Service saying she’s in, and welcome back. But she tells Sean she’s not taking the job.

“You said something to me that made me change my mind,” she says. “You said I was the only person you could trust.”

“And that means more to you than the Secret Service?” says Sean.

“That means more to me than anything,” she says. And she gets herself close to him, and it seems like THEY MIGHT KISS! But then they don’t, and she adds, “Of course, you didn’t trust me enough to let me know you thought Joan Dillinger was in on it!”

She leaves and Sean gets a phone call. A mysterious person on the other end says, “You should have been satisfied with being a footnote in history.”

“A friend with some good advice. Sometimes politicians need to be brought to heel. When they don’t listen, there are consequences. Your partner knows that better than anyone.”

“What does this have to do with Michelle?” says Sean. “Hello? Hello?”

The mystery guy is wearing a ring with a triangle on it. Any thoughts on who he might be?

What did you guys think of the “King & Maxwell” finale and season one, in general? Are you like me and already counting the days til season two? And do we know for sure there’s going to BE a season two?