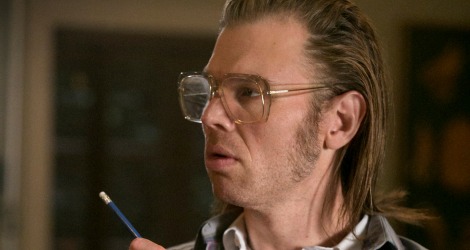 What?! No!! Michelle can’t be contemplating a move back to the Secret Service! And leave Sean?! Say it ain’t so!

I’ll try to contain my sadness over that idea and focus on this week’s episode of “King & Maxwell,” which starts with Michelle out rowing, racing another guy out on the water. Well, of COURSE she could beat that guy hands down. Of COURSE she let him win. Because they needed some footage (thanks to Sean’s remote control flying camera) of this guy rowing to prove he’s perfectly fine. Yeah, he’ll be going to jail for insurance fraud.

Also disturbing? Michelle kissing someone named Keith that’s not Sean. I know, she and Sean aren’t romantically together, but they have great chemistry and should be. Don’t you think this would be a fun show if they were together AND solving crimes? I say that’s where the writers should go with it. Rigby’s kind of a sad sack character, isn’t he? On the one hand, he’s annoying. On the other hand, seeing him deal with the FBI Assistant Director in Charge – “the Rigby to your Rigby,” as Sean puts it – is sad. It’s giving me a little soft spot for Rigby.

And the end scene where Rigby gets shot made me sad, too. I guess I kind of like him! Even if he did fool Michelle into almost giving him mouth to mouth before she realized he had a bullet proof vest on.

And then there was that scene where Rigby stood up to his boss. “Adams was murdered to keep the truth from getting out,” he said. “I expect to see this through, with or without your support.” Go, Rigby! I can’t believe I just wrote that!

The case this week revolved around a confidential informant who’s shot while being held at the FBI office. I have a really hard time believing there isn’t a camera pointed at every single square inch of that place, but somehow, this guy is shot and the shooter is always off-camera.

The victim was a former supervisor turned whistleblower at a chemical company that’s been poisoning water, and he was set to testify today. Edgar turns up another whistleblower, and Sean convinces her to testify.

Turns out the shooter was Arnold, the evidence room guy who built a plastic gun with a 3D printer (do NOT try this at home!) inside the evidence room. At first Sean thinks it’s because Arnold wanted to be an agent and nobody took him seriously. Turns out he was an Oxycontin addict who had a huge debt, and his dealer told him he’d take care of it if Arnold handled a problem for him. “Either Adams died or I did,” he said. “And I chose him.”

Who else is in love with the idea of Edgar and Benny getting together? They’re fun together. First, she asks him to bring her a loofah sponge, which he does, opening the shower curtain wide and handing it to her. She’s not even phased. Neither is he.

Then, she makes him a grilled cheese sandwich – which she cuts with her fancy schmancy pocket knife thingy after he says Sean always cuts it diagonally for him. Only she didn’t make it with jalapeno cheese, like Sean does. So Edgar makes HER a grilled cheese and cuts it into a happy face, which they eat it together on the deck while watching the sunset. So sweet.

He also helps her with her “Benny in a Box” problem. “My sister used to fold my pants wrong,” he says. “I told her that I didn’t like it. It’s good to tell the people you live with the truth.”

“I’ll keep that in mind, Edgar,” she says, smiling.

The episode ends with Sean pondering the wall of notes about his Brady Ritter/Secret Service case, the FBI evidence room key card in his hand. Is there NO security around that place?!

“I’ve already shampooed, with conditioner, for a smooth and healthy shine.” – Edgar to Benny

“I think I have whiplash.” – Sean
“He barely tapped us.” – Michelle

“I reached my daily limit of King and Maxwell about an hour ago.” – Rigby
“We’ve only been here ten minutes.” – Sean

Edgar likes Velveeta – why does that not surprise me?

Someone tell me what “sandlotted” means!