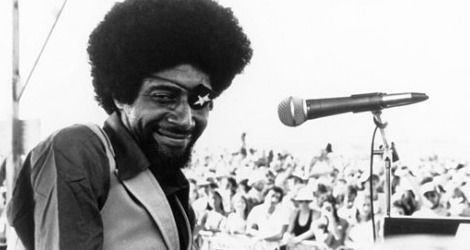 You don’t have to know much about piano playing to recognize the genius of James Booker. All it takes is listening to one of his recordings, and you won’t believe it’s only one person playing one piano.

Booker was a virtuoso who would have intimidated Jelly Roll Morton. He could play classical music, as well as play and sing the blues. For example, he put his own spin on Chopin’s Minute Waltz, turning it into how it would sound “if Chopin were black and from New Orleans.” Even 30 years after his death, Booker is still a legend in the Big Easy, but he is little known outside the city.

That unfortunate obscurity is what filmmaker Lily Keber set out to remedy with her documentary, “Bayou Maharajah: The Tragic Genius of James Booker.” I spoke with her about the experience of delving into the life of someone who was one of the most eccentric characters in music history (and that’s saying a lot!)

When Keber moved to New Orleans in 2006, she frequently heard Booker’s music played around town. She asked about him, and the locals regaled her with stories – “every one more outrageous than the last,” she says. “In New Orleans, everyone of a certain age has a Booker story and remembers seeing him do something crazy.”

In fact, she adds, “With Booker, the more outrageous the story, the more likely it is to be true.”

Besides footage of the man himself performing around the world, the film includes many interviews with the people who knew him best. These are mostly musicians who shared the stage with him, and they include Dr. John, who toured with Booker, and Harry Connick, Jr., who was just a boy when he met the elder pianist. There is a photo shown in the movie of Booker sitting behind young Harry at the piano. So, why is this man, this “Bayou Maharajah,” so special? “Booker is one of America’s greatest musicians,” Keber says. “As Harry Connick said, which I don’t think is in the film, a lot of people play piano, but there are very few people who can develop an entirely new approach to the instrument.”

One of the highlights of the film is a moment when Connick sits at the piano and explains Booker’s keyboard techniques. Connick’s affection for his mentor is palpable in the documentary, and his presence carries a lot of weight.

“He really wanted to be in the film to make sure that Booker’s memory is preserved and passed on,” Keber told me. “He was so generous with his time. They carved out time from his schedule to make sure that I had enough time to get everything, and just him sitting at the piano and playing this stuff blew me away. It’s one of my favorite memories from making the film – just the chance to watch him play.”

Keber said she gathered a lot more footage than she could use. “I talked to a lot of piano players who did a similar sort of thing as Harry – breaking down Booker’s style – and I think that’s such important footage. I want to make sure that it gets out there,” she says. “I’d love to do an educational DVD to give to music programs because I feel like Booker deserves to be studied alongside Mozart or Beethoven or Coltrane.”

She wanted the documentary to be interesting to non-musicians, however, so she reserved the more technical footage. “I don’t want you to feel like you have to have a music degree in order to appreciate it,” she stresses.

Despite his musical abilities, Booker was often discriminated against … times three. He was African-American, he was gay, and he was handicapped (missing an eye). He wore a patch with a star on it, and to this day, no one knows how he lost that eye. The tall tales about it abound, however. He was also an addict, and his substance abuse is what eventually killed him at the age of 43.

Keber says that even though most people were very willing to talk to her about the man, his homosexuality was a sore subject for some. “It’s the biggest single issue that I got push-back on in the film because I was making the film that said he was gay. It’s not that big an element in the film, but even today, some people can’t deal with that fact and didn’t want to be part of the film because of it.” Some people said they had no idea he was gay, while others said, “How could you not know that about him?”

Still, Keber never found anyone who claimed to have been one of his partners. “I don’t know if Booker was mentally stable enough to sustain a relationship. I think he had a hard time just sustaining his friendships.”

She sees him as a very lonely figure, and certainly the circumstances surrounding his death bear that out. (I won’t disclose those circumstances here.) Connick was at school when a phone call from his father broke the news of his friend’s death.

Regardless of the tragic side of Booker’s life, the stories about him show that he was full of life. As perhaps is true of many prodigies, Booker could get away with more than the average person.

“I feel like Booker is one of these trickster characters like the coyote in Native American stories,” Keber says. “Even when he was young in Catholic school, he could pull one over on the nuns in a way that no one else could. So, even when he’s pawning Allen Toussaint’s saxophone, who’s going to do that? Well, James Booker could get away with it.”

After hearing so many crazy stories about him, what was the most surprising thing Keber learned about Booker? “His intellect. He was well-read, he spoke languages, he was very good at math. It sort of makes sense with that level of musical genius.”

He also had very proper handwriting like a grandmother’s or a 1940’s school boy. “You don’t expect that from someone who is so portrayed as a madman,” Keber says. “He was very trapped in who he was, but he also had the intellect to know what a gift he had.”

Booker was apparently able to play flawlessly while wasted out of his mind. There’s one story about his teeth falling out onto the piano while he continued to play without missing a note. At times, though, he would be in a bad mood and refuse to play at all with no regard for the patrons who had come to see him.

“The one concert I didn’t use,” says Keber, “was from just a few days before he died, and he does not look in good form. His playing is impeccable, but clearly, [his addiction] has taken a toll. It’s not necessarily surprising to find out that he died shortly after…. James Booker is like the patron saint of bar flies – the guy who can be drunk and still play better than anyone.”

She sees the documentary, in part, however, as a parable against drug use. “There’s nothing cool about that in the end…. If he hadn’t been a junkie, where might he have gone?” Ultimately, besides reinvigorating the legacy of a musical phenom, Keber hopes that her film will raise questions about how much we nurture artists.

“How does our culture deal with our creative people even to the basic level that there wasn’t a lot of mental health support when Booker was around. But today, in New Orleans, there’s less, not more. So, how do we really expect our geniuses like this, to say nothing of us lesser mortals, to survive and function?” she says. She hopes the film will get people thinking about possible answers.

“Bayou Maharajah: The Tragic Genius of James Booker” had its New York premiere at Lincoln Center in July 2013 and will screen at film festivals through the end of the year. Keber is looking for a distributor, so watch for this documentary. “Like” the movie’s Facebook page in order to stay up to date on where and when you can see it.

This documentary is a fascinating portrait of an enormously talented and eccentric man. I promise that I haven’t told you all the great stories in the movie. There’s much more to learn about Booker, and while it’s a sad story, it’s also very entertaining stuff. Plus, many of his songs are now on my iPod; I trust they’ll end up on yours, too, after you watch this film.