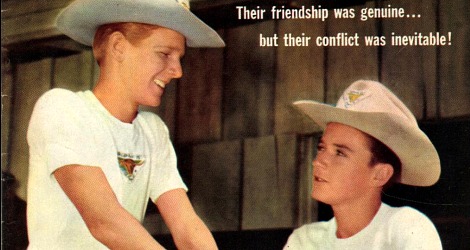 When my son heard I was going to visit Disney’s Golden Oak Ranch near Newhall, California, he predicted I would shed a tear when they took me to the place where heroic Old Yeller was shot.

If you’ve seen many major films and television episodes from the last 60 years or so, you’re bound to have seen scenes filmed at this historic ranch.

Located in the Santa Clarita Valley less than an hour’s drive from downtown L.A. , the ranch was named for the tree where Francisco Lopez discovered gold in 1842 . It’s a spread of about 900 acres, including ponds, meadows, waterfalls, creeks, golden foothills, and numerous frontier-type structures where countless films, starring such Westerner heroes as Roy Rogers, Gene Autry and “Bonanza’s” Cartwrights, were shot.

A list of other films shot wholly or in part at the ranch includes “Roots II,” “The Parent Trap,” “Pearl Harbor,” “Pirates of the Caribbean” I and II, “The Country Bears,” “Follow Me, Boys,” and of course the aforementioned iconic “Old Yeller.”

The list of television series episodes filmed here would fill up several pages. On that list is the most successful Mickey Mouse Club feature: the three-seasons series “Spin and Marty” (1955-1957: starring Tim Considine, David Stollery, and in the second and third series Annette Funicello and Darlene Gillespie).

Wannabe cowboys Spin and Marty spent three gloriously adventuresome summers at the Triple R Ranch in this series that was shot mainly at the Golden Oak. Check out the excellently researched website on this famous Micky Mouse Club program, cinchset.com.

Watching that series unfold in the hills and fields of California convinced me, as it did a lot of other kids at the time, that to have a fulfilled life it was absolutely necessary to get out to the Golden State and wrangle horses, a dream finally realized for me a few years ago when I began volunteering at the Heart of the Horse Ranch near Clovis. California, a ranch dedicated to providing therapy for disabled kids and veterans.

The Golden Oak Ranch does not offer regularly scheduled public tours as some Hollywood studios do. Its business is to encourage film and television producers to inspect the  sites for future productions, and it’s, of course, a very busy place. On the day I was there, they were filming commercials, as well as an episode for “NCIS.”

Naturally, once at the ranch, I was particularly interested in seeing where earlier works like “Old Yeller” and “Spin and Marty” were filmed. Of course, there have been several changes since those iconic films were made. There is only one building left from the “Spin and Marty” series and none of the “Old Yeller” set. But many of the natural features are preserved, and you can still spot the meadows, hills, streams, and corral areas that evoke nostalgic childhood memories.

Formerly leased by the Disney Company, the ranch was bought outright by the Disney Corporation in 1959.  In recent years, a 14-house residential set and an urban district set (which can double for Chicago or New York scenes, for instance) were added. Current plans include Disney/ABC constructing soundstages at the ranch; however, there will be an ongoing effort to protect the storied rural and wilderness areas of the site.

Now, about my son’s prediction: when I visited the site where iconic “Old Yeller

“was tearfully dispatched by the boy who loved him, did I shed a little salt water myself? I won’t say, but critics have suggested that for American guys watching that famous movie scene, it is considered not unmanly to get a bit emotional.