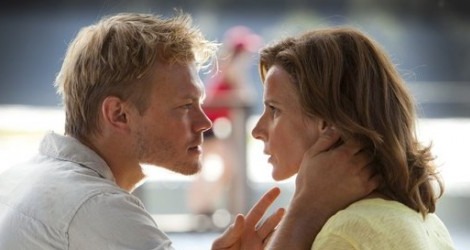 Phew, I am finally caught up with “Camp“! I just finished watching episode 5, and it was full-on summer camp shenanigans. Let’s see if I can get all of the good stuff recapped! Remember, there are a lot of characters and storylines to talk about.

“Heat Wave” is the title of this episode – although it has two meanings. One is the outside temperature, and the other is the “heat” between characters.

Let’s start with Mack. She gives her morning announcements at breakfast, but doesn’t acknowledge Buzz’s birthday – his 16th! (My son just turned 16!). He is hurt that she didn’t say anything, but of course she has a surprise for him – the night vision goggles he has always wanted. BUT, her rat ex-husband got them for him! Now she has to find something better, of course.

In the meantime, the generator goes out on the hottest day of the summer, so Mack has to go into town to try and find a new one. Cole runs into a man from his past that he would rather forget, and to get away from him, tells Mack he will go to town with her. (Yes, I want them together).

When she leaves, Buzz decides to throw himself a camp birthday party, including booze (which he finds in the shed) and girls! He tells Kip that he finally wants to “get some.” As we all know (you need to watch the first episode to know what is going on), Kip and Chloe are together (even though Buzz likes Chloe), and Greg and Marina are together (Kip likes Marina). More later.

In town, Mack asks Cole who he was talking to. He tells her he was a recruiter from a university. She learns he had a shot at The Majors, but was injured during the first season, which lead to the end of his (short) playing career. It was very nice seeing the fun Mack and Cole had in town. I think this could lead to something, don’t you?

Sarah, who is having the “summer only” relationship with Robbie (who is very sweet, right?), decides to go to Ridgefield (the rich kid) to try and get a back-up generator. Well, of course, she runs into Miguel. And you know what happens with them, right? Ugh, yes, she hops into bed with him. I must say, he is quite romantic. But still! She is with Robbie! I don’t care for her character. I guess I’m not supposed to.

Zoe’s two dads also decide to go and look for a back-up generator (hey, the camp may end up with three new generators!), and they put Zoe in charge of watching her little brother. Probably not a good idea.

Buzz’s party gets into full swing. Oh, I forgot to tell you that Greg’s roommate was gone, so he and Marina – well, you know. Kip isn’t going to be happy. I wasn’t happy.

Back to the party. The alcohol flows, and now Buzz decides to play truth or dare, and ends up (on a dare) pouring hot sauce down his pants, wearing a bikini top, and making out with a tree (weird dare). He asks Kip on “truth” if he has kissed anyone this summer (Buzz saw Kip and Chloe make out in the kitchen). Kip lies and says no … several times. Buzz is ticked off that he is lying. Oh, and Grace decides to attend the party and have a shot of booze. Where is little brother? I told you, there’s a lot going on in this show!

Back to Mack and Cole. They go to a video arcade and race cars. That’s where she decides that male “degenerates” (I love her comments) like “girls and cars.” She decides she wants to get Buzz an SUV for his birthday. Nice. She knows Roger, at Ridgefield, has one she might be able to buy. Cole helps her by making it a competition between he and Roger. She can’t afford the $5,000 Roger wants, so sweet (smart) Cole tells her to play along with him. He makes it a competition telling Mack – in front of Roger – that he will find a car and fix it up for her. He gets the price down to $3200. Nice job, Cole. Back to the party. Things get ugly. During the fabulous idea of playing truth or dare, Kip is forced to reveal that he is dating Chloe, Greg announces that he slept with Marina (sorry, Kip), and everyone gets mad! Kids. Buzz and Kip end up fighting outside, and Kip tells Buzz he lied about dating Chloe because he has cancer and said she she would tell everyone at camp. Buzz feels horrible about it.

Grace leaves the party and can’t find her brother. She panics! Luckily, Robbie is there to help find him. Todd, one of her “dads,” comes back just in time to help with the search. While in the woods, Todd is stung by a bee. His throat starts to close and he has trouble breathing. Zoe is very upset, she apologies and cries. Thank goodness Robbie has an EpiPen and saves the day! And guess what, they find her brother. Imagine that! Later, Robbie goes to the kitchen and finds Sarah, who acts like Miss Innocent (am I being mean?). He is a nice guy, and she just needs to decide who she wants to be with. He has no idea – yet.

Buzz has one more dare. Greg says, “I dare you to steal that ATV.” Buzz gets a huge smile and he and Kip take off  – out of control and end up in the lake. As perfect timing goes, Mack and Cole return from town to see what has happened. Jump ahead to Buzz waking up on Mack’s cabin floor with a hangover. They talk and he knows he was an idiot (a typical 16-year-old – I have a headache thinking about my own), and apologizes. She takes him out to see his birthday present and he is overjoyed. But, she tells him he is not responsible enough yet and has to return it. “Mom!” He understands, though.

Mack and Cole sit on the dock and talk. They are very comfortable and easy going with each other. She still can’t believe she didn’t know about his potential baseball career. – He ends up kissing her, and she shakes her head no (after). “Why,” he says. “All kinds of reasons,” she replies. He gets up and walks away. Watching her face though, I think he’s got her on the hook…and I like that.

Have any of you been watching Camp? What do you think? I am getting to like it and the characters. Please leave any comments you have.