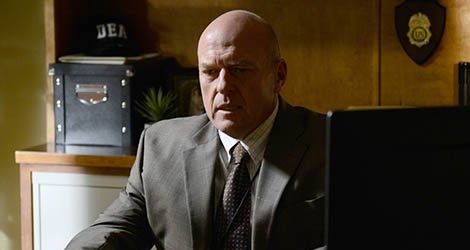 After last week’s episode of “Breaking Bad,” I think everyone was wondering, where do we go from here? Walter and Hank finally had that moment that’s been building for five and a half seasons, and Walter told Hank to “tread lightly” (destined to be a classic TV catch-phrase).

This week’s ep begins with an old man getting into his pickup truck and seeing one of Jesse’s blood money packs in his driveway. And then finding more and more as he wanders out into the street. Good call, Jesse. This money can help someone who really needs it.

But as the guy wanders further, he sees Jesse’s car with the money in it, and Jesse himself going round and round on one of those old playground sets.

Cut to Hank’s house and Walter is coming out of the garage. The two stand and stare at each other like some kind of Old West shootout, and then Walter frantically calls Skyler, who it turns out is on the phone with Hank. When Walt gets to the car wash, Skyler has left and gone to meet Hank at a diner. It’s all very tense, but Hank awkwardly hugs Skyler and says his head is spinning.

He says so much makes sense now – her jumping into the pool and sending the kids to Hank and Marie’s. “He’s a monster,” says Hank. “I don’t know what he did to you to force you to keep silent … but I want you to know that you can be open with me. I won’t let anything bad happen … you’re done being his victim.”

Only, can Skyler really BE open with Hank? She’s part of the operation now. She’s an accessory or perhaps even more. But Hank wants her to move to his and Marie’s house. They’ll figure it all out later, he says, placing a recorder on the table and asking her to tell him everything. He needs something to bring to his people, and if she tells him something, that’ll go a long way towards putting Walter away.

Oh, and when Hank mentions Walt’s cancer – “I don’t want him running out the clock” – Skyler doesn’t know anything about it. I can’t imagine what’s going through her head right now. But she’s smart. She tells Hank that maybe she should get a lawyer. Hank tells her he’s her best advocate, but obviously, Hank isn’t in it just to help Skyler out of a bad situation.

And she knows that. “What you want is to get Walt at all costs,” she says. “Am I under arrest?” And then she leaves in a panic. He thought he could bully her – in his own way – to get what he wants.

Meanwhile, two of Saul’s guys go into the storage area where the big pile of cash is stashed. They both lay down on top of the money – I would have done that, too. How often do you get that opportunity?

Walt’s at Saul’s office when Skyler calls him. Saul tells Walter not to answer it and, by the way, take the battery out of your phone too. They’re both worried about what Skyler might have told Hank.

“Have you given any thought to sending him on a trip to … Belize…?” asks Saul.

“Saul, you’d better not be saying what I think you’re saying. He is FAMILY!” says Walter. So, everyone else is dead meat, but the guy who could do him the most harm is off-limits? Maybe Walter hasn’t fallen as far as we think he has.

The guys show up with a white van and all the cash in barrels in the back. I’m not sure I could have moved that money without grabbing a few packs or ten or 20. Walter takes the cash out into the desert and buries the money. He’s pretty energetic for a guy with cancer. Must be running on adrenaline. He memorizes the coordinates of the money.

Skyler is home with the baby when Marie and Hank show up. Sky lets Marie in, but not Hank. Marie wants some answers and says it can’t be true. You can tell these two sisters love each other, but it’s like Marie doesn’t really know her anymore. Then Marie slaps her – hard (though in the “Talking Bad” segment after the show, Anna Gunn said it was a “non-contact slap.”)

Then the sisters have a huge argument about Marie wanting to take the baby. Hank breaks in and tells Marie to give Skyler the baby, who’s now crying. (Anna said they used a “fake baby” for everything other than the close-up shots – thank goodness).

Hank and Marie get in the car, and she says, “You have to get him.” The wheels are turning in her head about how long Skyler has known – since before Hank was shot – and Marie’s just in shock at this point.

Walter goes home and finds Skyler there. She says she told Hank nothing, but he ignores her, then collapses on the floor of the bathroom as he’s trying to take a shower. He wakes up later – still on the floor – but with a pillow and blanket and Skyler nursing him, asking whether the cancer is back.

“Does that make you happy?” he says.

“I can’t remember the last time I was happy,” she says.

He wants to give himself up, as long as she keeps the money and passes it on to their children. “Please don’t let me have done all this for nothing,” he says. This is sort of a heartbreaking scene, but you can tell that Skyler still has a lot of love for Walter.

“You can’t give yourself up without giving up the money,” she says. “So maybe our best move here is to stay quiet.”

Lydia, in her nice clothes and high heels, goes to meet the other meth dealer and see his operation in the desert. He takes her to their underground bunker lab. It’s filthy, and nowhere near up to the “standards of your predecessor,” she says. She can’t move this substandard stuff. She wants him to use Todd, who studied under Walter.

There’s a little problem, though, and a ton of gunfire up above, as Lydia stays down below. When it’s safe to come up, she doesn’t want to see the carnage – of which there is lots – so she closes her eyes as one of her guys leads her through the blanket of bodies.

The next morning, Marie and Hank discuss the situation. She thinks he should tell someone. “Look, the day I go in with this is the last day of my career,” he says, noting that he’d have to admit that the person he’s been chasing the past year is his own brother-in-law.

But she’s got a point. If the FBI catches Walt before he says anything, that’ll make him look way worse. It’s a lonely place when he goes into the office. And he learns that Jesse, who’s being questioned by the feds, tossed millions of dollars all over Albuquerque.

So Jesse must have turned himself in? I’m guessing the old guy who found the money in his driveway didn’t do it.

Your thoughts on this week’s episode of “Breaking Bad”?