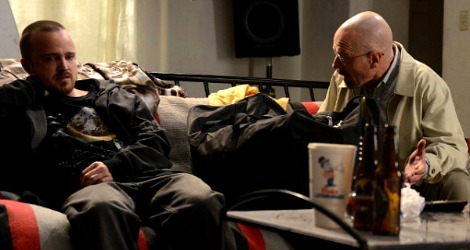 The final eight episodes! I’m both excited and sad for “Breaking Bad” to end. But here we go…

And holy cow. Walter either has no conscience whatsoever left, or he’s trying to make Jesse feel better about things so they can both move forward. I’m thinking it’s the first one. But I’m getting ahead of myself…

To refresh our memories, here’s where we’re at: Walt killed Mike, Hank was promoted, Skyler showed Walt a huge pile of cash in the storage area and they bought the car wash, and Hank found the Walt Whitman “Leaves of Grass” book in Walt’s bathroom, thus revealing who the real Heisenberger is.

This episode begins with the usual flash-forward (and we’re left wondering how we get from here to there during these final eight episodes). Walt drives up to his now-abandoned house, cordoned off with a chain-link fence. He opens the trunk (which includes some weapons) and uses a crowbar to crank open the fence and get inside the house. On the wall is written in spray-paint “Heisenberg.” Who wrote it? I have no idea.

Walt sees some kids using the now-empty pool as a skateboard area. He wanders through the house, opens an electrical socket on the wall and takes out that little vile of Ricin. Who’s he going to use it on? Again, no idea.

Back outside, he sees their neighbor and says, “Hello, Carol,” at which point she drops her bag of groceries.

Flash back to where we left off in the previous episode. You remember: the routine family BBQ. Nothing out of the ordinary. Until … Hank takes the “Leaves of Grass” book out of the bathroom and puts it in his bag on the counter, while peering through the window at Walt holding the baby and being Mr. Suburban Dad. Hank goes outside and tells Marie he doesn’t feel well and they need to shove off.

Here’s where Walt says, “Hello, Carol” to the neighbor, thus connecting that flash-forward scene to this one. What a difference time makes.

Meanwhile, Hank is more than a little freaked out over the whole “Leaves of Grass” thing, and has a major panic attack, running through someone’s white picket fence and ending up in the Emergency Room. Later at home, he’s ok. No heart attack.

He compares the handwritten words in the “Leaves of Grass” book to the same words on a yellow paper from his files. It’s the same. The jig’s up for Walt. Or … is it …?

The next morning, Walt and Skyler are at the car wash. Walt starts talking about rearranging the air fresheners. “Sure, that’d be fine,” says Skyler. Just another day at the A-1 Car Wash. “Have an A-1 Day!” they cheerfully tell all their customers. Things are buzzing along there, and Walt tells Skyler they should open another one.

“Skyler, we’ll be laundering that money for years. Decades. Wouldn’t two be better than one?” he asks. Why, yes. It would. They’re doing the Lord’s work, helping people keep their cars squeaky clean.

At this point, Lydia shows up. Remember Lydia? She starts talking to Walt about how there’s a drop in quality and this isn’t what she signed up for. He ignores her and says, “Have an A-1 day!”

Skyler ponders who would wash a rental car, and when she learns that this woman is a former business associate of Walt’s, she approaches Lydia and says, “”Get out of here. Now. Never come back here. Do you understand me? Go.”

Meanwhile, Hank is going through the Heisenberg files in his garage, and what a trip to see photos (mostly of dead people), documents and evidence from all the previous five and a half seasons. How Walt managed to stay out of those files is a major miracle.

Jesse’s zoned out at his house with a couple dudes doing bong hits, eating pizza and talking “Star Trek.” Jesse goes upstairs, gets a couple of big bags, and goes to Saul’s office, where he proceeds to sit in the lobby and smoke a joint to get the attention of the secretary. That gets him immediate entrance into Saul’s office.

Jesse doesn’t want the money. He tells Saul to give one bag to the dead kid’s parents and the other to Mike’s granddaughter. There’s $2.5 million in each bag.

Cut to Walt doing chemo. Yes, the cancer is back. After getting a call from Saul, Walt goes to Jesse’s and tries talking some sense into him about the money.

Walt says he was wrong to say that. This is Jesse’s money and he earned it. “You need to stop focusing on the darkness behind you,” says Walter. “The past is the past. Nothing can change what we’ve done, but now that’s over. You’re out, and so am I.”

Jesse can’t believe it, but Walt says he’s been out for a month. “There’s nothing left for us to do except to try to live ordinary decent lives,” says Walt. Yeah, based on the opening scene, I’m guessing that doesn’t go so well.

And here’s where we see once again how far Walt has fallen. He outright lies to Jesse about Mike, saying how he’s still alive. “Mike is perfectly capable of looking after his own granddaughter,” says Walt.

But Jesse says, “You doing what you did, offing Mike’s guys. If he was out there, you’d have to look over your shoulder the rest of your life. I think he’s dead, and I think you know that.”

“I don’t know that,” says Walter. “I don’t. Listen to me, I did not kill Mike.” He proceeds to say that Mike got the bag Walt retrieved from him and drove away. “For all I know, he is alive and well … Jesse, I need you to believe this.” Wow.

I ask again: Does Walter have a conscience? Is he trying to make Jesse feel better about leaving the past behind and moving forward? Or has Walt fallen so far he can’t see the truth anymore?

Later at Walt’s house, he, Skyler and Walt Jr. are having dinner. Walt goes into the bathroom to throw up (chemo) and that’s when he realizes the “Leaves of Grass” book is gone.  I had to laugh when he put a towel under his aging knees when he was throwing up.

He goes outside and finds the tracking device – the same device that he and Hank used to track Gus Fring.

We see Jesse giving a homeless guy a pack of money, and then he gets the idea to toss out money in a poor part of town – and goes about doing that. Look, he’s trying to rectify his situation and that blood money somehow. That seems like a good way to do it. Why not, right? That money’s not going to just disappear by itself. It might as well be put to good use.

The episode ends with Walt driving to Hank’s house and confronting him about the GPS tracker. Hank puts the garage door down and slugs Walter. “All along it was you!” he yells, and proceeds to tick off the list of wrongs done by Walter, including bombing the nursing home.

Walter says these wild accusations will destroy their family, and also tells Hank his cancer is back and he’s doing chemo and fighting like hell. “But the truth is, in six months, you won’t have someone to prosecute … I’m a dying man who runs a car wash. My right hand to God, that is all that I am. What’s the point?”

“If that’s true, if you don’t know who I am, then maybe your best course would be to tread lightly,” says Walter.

Ooh, a threat. Things end with those two awkwardly staring at each other in the garage. Where do we go from here? Somehow, we get from here to that beginning scene with Walt getting the Ricin out of his abandoned home. Hmmm…