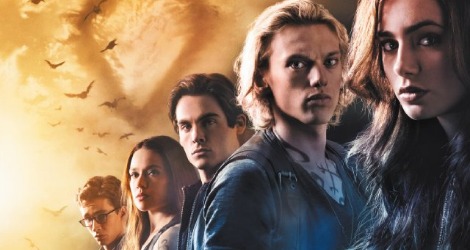 What a spectacular preview clip for “The Mortal Instruments: City of Bones“! At five minutes long, it’s a long-enough teaser to surely make most fans of the Mortal Instruments series hanging on the edge of their seats, waiting for the movie’s August 21, 2013 release date.

There are a few departures from the novel. It’s been a while since I’ve read the book, but I don’t recall a symbol that Clary (played by Lily Collins in the movie) keeps drawing. And in the book, even after Jocelyn disappears, no one is too sure that Clary isn’t a mundane; the realization that she’s not comes later, after she and Jace (played by Jamie Campbell Bower) leave the Institute to go back to Clary’s place to get her things.

The book doesn’t give any details about what exactly happened to Clary’s mom, Jocelyn (Lena Headey), but the clip shows Jocelyn’s fight with demons, and drinking some sort of potion just before she’s captured.

And of course, there’s Clary’s fight with the demon. In the movie clip, Clary is far more resourceful than she is in the book. I found myself quite liking that, actually.

So I don’t mind the changes all that much; the sequence of events shown in this clip is quite exciting, and I’m guessing the symbol thing must play an important part in the movie. Plus, I like the resourcefulness of the movie version of Clary; it feels very empowering.

All in all, this clip is really making me look forward to the release of the movie!

See for yourself: watch the preview clip below, and tell us…