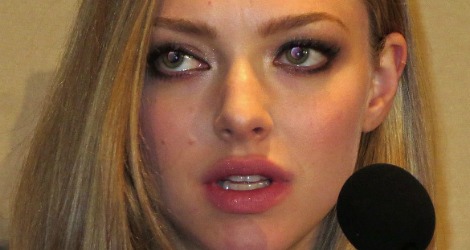 “Deep Throat,” about a woman with unusual oral talents, was the first scripted pornographic feature film. The movie grossed hundreds of millions of dollars, while Lovelace’s take was a paltry $1250 for an eight-day shoot that haunted her for the rest of her life.

In the deeply disturbing movie, directed by Rob Epstein and Jeffrey Friedman, Seyfried’s character gets whacked around and continuously brutalized by her husband, Chuck Traynor, portrayed with sickening menace by Peter Sarsgaard, who, according to Lovelace’s autobiography “Ordeal,” forced her into pornography and prostitution.

The all-star cast, headed by Seyfried and Sarsgaard, along with Azaria, Stone, Brody, Mazar, Noth and the film’s directors, appeared at a press conference in the Mandarin Oriental in Columbus Circle earlier last week to talk about “Lovelace,” due in theaters Friday, Aug. 9, 2013.

“I’m a pretty cynical person so I knew right off the bat when I entered into this project that I was going to have to leave that at the door,” Seyfried replied, when asked how she felt about the real-life person she portrayed. “My job is to validate her in lots of ways.”

The role’s biggest challenge, she said, was simply the responsibility of playing a real-life person for the first time and justifying her accurately and honestly, especially since the directors made the film with the cooperation of Lovelace’s children. “I’ve never done it before. It’d be even harder if she was alive,” Seyfried said.

As for how difficult it was to shake off the role of Lovelace, Seyfried explained,  “I did ‘Les Miz’ three weeks after this wrapped, and so I just jumped into that. I played an 18-year-old virgin, so it really worked,” she said. In Lovelace’s initial innocence, she found commonality between the two roles. “There actually are a lot of similarities between Cosette and Linda. It was hard. I actually lost myself in it, I realized for the first time ever in my career, so I feel like a real actor now.”

Epstein described the movie as a story people can find universal. “It is a story of a young woman who found herself in a circumstance not of her making at a very young age and how she had to struggle to find her own power and her own voice within that. That was always the overarching theme for us. It was set in a world that took her into a very dark place by the nature of her relationship with Chuck Traynor, and the fact that she was the victim of domestic violence, but for us, it was always Linda’s story.”

Sharon Stone, who made an impressive but late entrance at the press conference in a dazzling tangerine dress, is unrecognizable in the film, wearing no makeup and matronly dresses. She convinced the directors she could take on the role.

“First of all, I was very fortunate to get this part from these brilliant and thoughtful directors,” Stone said. They brought her material on Lovelace’s mother, and she did extensive research and also drew on her own life.

Most of the focus was on Seyfriend who was asked repeatedly how she related to her character. “I think a lot of women can relate to her in that she was kind of stuck. She made some bad choices. She was escaping one bad situation and entering into another bad situation and how can you foresee that?”

As for what she learned from Lovelace’s life, “I didn’t care about her story when I heard about her, way before this movie even came into existence.” Like most people, she thought of Lovelace as a two-dimensional person. But as she delved into the role, she found more depth and realized she wanted to give her character a voice.

“She’s always just trying to figure out who she is and trying to find her footing and her life like we all are. And her circumstances are pretty awful, which is why I wanted to play her because I felt like I could do her some justice. She tried so hard to be heard.”

Seyfried admitted she initially had some qualms about taking on the role and was concerned how it would affect her image. “There’s always fear how you’re going to be perceived afterwards with a role like this.”

After meeting the directors, who she trusted, she forged ahead. Perhaps the actress was also trying to shed her clean-cut image. “It seemed like the perfect challenge for me,” Seyfried said. “I needed an emotional education, and I also needed to lose myself in something and I really believed in this woman, so it really wasn’t that hard. The sex is something that has such a stigma about it for younger actresses that I know. I don’t feel like it’s that scary. We’re all humans. That was the least of my worries.”

The nude scenes, she concedes, made her uncomfortable, but mainly because she was worried about watching the movie with her father at the premiere at the Museum of Modern Art that evening. “I don’t want my dad to see my naked body ever,” she said, as the journalists cracked up. “I’m going to sit through it tonight and cover his eyes.”