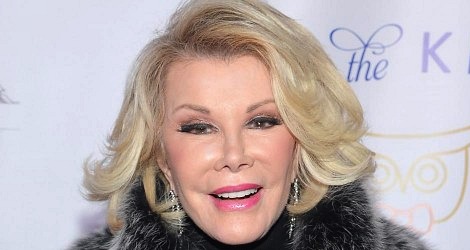 The Writers Guild of America, East has amped up charges against Joan Rivers.

On July 3 the Council of the WGA voted to send charges filed against Joan Rivers, who is a member of WGAE, to a hearing before a three-person trial board.

They allege that the “Fashion Police” comic violated the union’s rules by writing and performing showrunner duties for the E! Network show. Writers Guild members have been on strike against “Fashion Police” since April 17, 2013.

According to the release issued by Sunshine Sachs, the high-powered publicists of the WGA, writers on that show are paid a fraction of industry-standard compensation and receive no health or pension benefits.

If the WGAE’s governing body determines that the charges against Rivers are proven to be accurate, this would mean she violated the union’s rules according to the WGAE’s constitution and bylaws. They will refer the charges to a trial board, and Rivers will be given the opportunity to present her case directly to them, which include testimony from the striking writers.

“We are distressed by reports that Joan Rivers, who worked so hard to create an illustrious career, turned her back on other writers who are still building careers of their own,”  said Michael Winship, WGAE President.

The question of whether she has, in fact, violated working rules will be decided by the trial board. He added, “We cannot pre-judge the outcome, but we can say that it is a very serious matter when a member is accused of writing and showrunning on a non-covered show, and continuing to do so after the other writers have decided to go on strike for reasonable pay and benefits.”

On a personal note, whenever I saw her at events she was always so friendly and funny and talkative. Whenever I need a witty and amusing quote at a premiere or party, especially after a string of canned interviews from boldface names, I could always count of Rivers for a welcome jolt of humor.

I am shocked she hasn’t addressed any of the serious charges against her. Controversy is not new to her, and it’s usually fodder for her. I guess there’s no way to mine this for comedy.