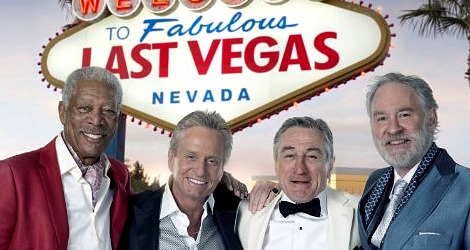 Here’s the new trailer for “Last Vegas,” which seems to be a boomer version of “The Hangover.”

The movie is directed by Jon Turteltaub (“National Treasure,” “While You Were Sleeping”) and written by Dan Fogelman (“Crazy, Stupid Love”).

The story follows four long-time friends (Douglas, De Niro, Freeman and Kline) who decide to have one last blowout party in Vegas before one of them, Billy (Douglas), a sworn bachelor, proposes to his 30-something girlfriend. (Douglas can relate). They decided to relive their glory days while they can. I’m assuming trouble finds them in Sin City, which has changed since the days of the Rat Pack, and their friendship is tested and possibly deepened (or not) while comedy and hijinks ensue.

We’re just hoping neither Michael Tyson nor hungry tigers end up in their hotel room.