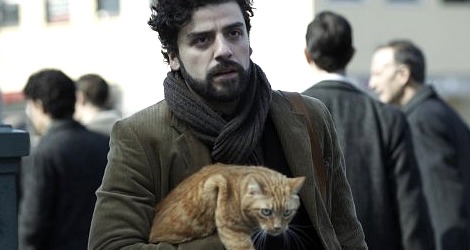 CBS Films just released the trailer for Joel and Ethan Coen’s new film “Inside Llewyn Davis,” due in theaters Dec. 6, 2013, just in time for Oscar season.

“Folk singer with a cat?” John Goodman’s character sarcastically asks aspiring bearded folk singer Oscar Isaac in the trailer. As the titular character of the film, Isaac schleps around a big orange tabby and a guitar. The movie is a pre-Bob Dylan tale about a musician trying to make it big in 1961 Greenwich Village. “Inside Llewyn Davis” was a highlight of the recent Cannes Film Festival, where it received a five-minute standing ovation and received second prize, The Grand Prix.

As you’d imagine from the “Oh Brother, Where Art Thou?” directors, there’s plenty of nifty music.

“Inside Llewyn” is loosely based on a memoir by folk singer Dave Von Ronk (1936-2002) and some of the songs sung by Isaac, including “Hang Me. Oh Hang Me,” were originally covered by Von Ronk.

Isaac’s got a terrific voice. He was a stand out in “10 Years,” (co-starring Channing Tatum) where he  played a pop star who returns to his high school reunion and serenades his high school crush (Kate Mara).

A few years back after an early screening of “No Country for Old Men” in Manhattan, I told Ethan (he’s the shorter one) that the film had real  Oscar prospects.

“It’ll be good for the Jews,” he cracked.

The movie went on to win an Academy Award for Best Motion Picture in 2008, and the brothers’ latest feature could be a repeat of that success.