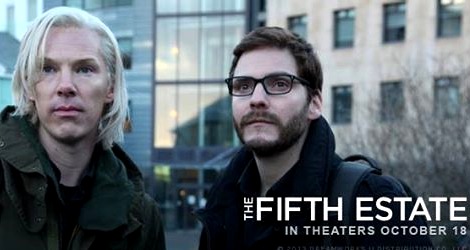 “The Fifth Estate” is the movie WikiLeaks founder Julian Assange probably doesn’t want you to see. Here’s a look at the official trailer, just released from DreamWorks.

The thriller stars Benedict Cumberbatch with some seriously long white hair, even  more extreme than any of the many hairstyles Assange has sported over the year. (Now he has a conservative short cut.)

The movie, directed by Bill Condon, begins with Assange and his colleague, Daniel Domscheit-Berg (Daniel Brühl), teaming up to start WikiLeaks, a site where whistleblowers can drop their covert data anonymously to reveal fraud and government wrongdoing.

Soon WikiLeaks is breaking hard news, publishing documents revealing fraud by the head of Iceland’s biggest bank. Then they post a video that shows Americans shooting down civilians, including Reuters reporters, in Iraq.

What finally gets the government on their trail is when the site gains access to a trove of documents that amounts to the biggest leak of classified information in history. The data came to WikiLeaks from a shy, unassuming army officer, Private Bradley Manning, who is now on trial in Fort Meade, Maryland, in a case that has been largely overlooked by the public and press.

That’s because there’s another whistleblower monopolizing the news: Edward Snowden, a former systems administrator for the National Security Agency in Hawaii, who passed thousands of documents from the agency’s computers and took off for Hong Kong, where he gave them to the British journal the Guardian.

Now the U.S. government has been hotly pursuing him since May. Snowden is holed up in an airport in Russia, where he seeks asylum. What makes “The Fifth Estate” more timely than ever is that WikiLeaks and Assange are back in the spotlight as they support and advise Snowden. Who doesn’t see another movie coming?

According to the trailer, “The Fifth Estate” seems to reveal Assange warts and all. It shows Assange’s colleague, Domscheit-Berg, angrily telling him, “This is about you and your ego, and the lies you tell to get whatever you want.”

The screenplay is by Josh Singer, based on the book “Inside WikiLeaks: My Time with Julian Assange at the World’s Most Dangerous Website

” by Daniel Domscheit-Berg, and the Guardian book “WikiLeaks: Inside Julian Assange’s War on Secrecy

” by David Leigh and Luke Harding.