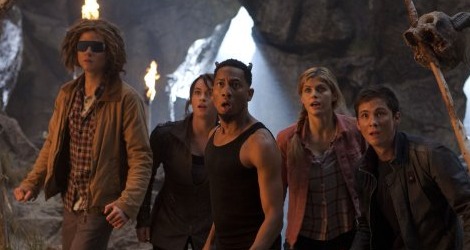 “Percy Jackson: Sea of Monsters” opens next month on August 7, and Fox 2000 Pictures has released a cute featurette called “Myths Revealed” that tells us a bit more about the myths we’ll encounter in the movie.

And make sure you check out Nathan Fillion as Hermes! Hermes is the messenger god, and in the movie he also, quite fittingly, runs the Olympus Parcel Service.

In “Percy Jackson: Sea of Monsters” (based on the book by Rick Riordan, the second in the Percy Jackson series), Percy (Logan Lerman), accompanied by his friends, Annabeth Chase (Alexandra Daddario) and Clarisse La Rue (Levin Rambin), and Tyson (Douglas Smith), his half brother, must journey to the Sea of Monsters (aka The Bermuda Triangle, as it’s known to us humans) in order to find the Golden Fleece and save Camp Half-Blood, a training facility for demigods like Percy (demigods are the offspring of gods and humans).

It definitely looks like it’ll be chock-full of fun!

Have you read the books in Rick Riordan’s “Percy Jackson” series? Looking forward to the release of “Percy Jackson: Sea of Monsters?” Let us know in the comments below!