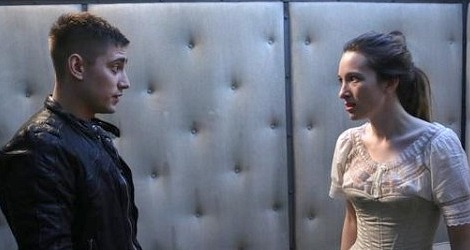 In the 20-minute preview, the show opens up in present-day Storybrooke. A storm is a brewing and a young stranger who looks like Michael Buble’s younger, skinnier brother walks down the street past Grumpy. He goes into the diner and pours himself a cup of coffee. At first, he puts down a dollar to pay for the coffee, but then looks around and seeing no one, he takes the dollar back.

As he takes a sip, what seems like an earthquake rumbles the diner. A hole blows through the floor and up shows a dapper looking white rabbit wearing a three-piece suit with Jerry Garcia glasses, sounding a lot like John Lithgow (because it IS John Lithgow!). The White Rabbit tells him that “Alice … she needs you.” We find out the stranger is the Knave of Hearts (Michael Socha). Across the space-time continuum in Victorian England, our fair Alice (Sophie Lowe) is being grilled by a panel of doctors. It looks like she’s in an insane asylum. No one believes her stories of Wonderland – all the ones we know well – an invisible cat, a smoking caterpillar and playing cards that talk. They want to treat her in a way that will make her forget all that she’s seen.

Alice seems pretty keen on the treatment because she’s lost the love of her life, a genie named Cyrus (Peter Gadiot), and wants to forget the pain she’s feeling at the loss. When the White Rabbit and the Knave of Hearts show up with Cyrus’ necklace, Alice’s hopes of finding her love are renewed, and the three make their Great Escape down the proverbial rabbit hole.

I have to presume Cyrus is the same blue-tinged genie in Aladdin, as Alice makes reference to the city of Agrabah, but of course, there could be more than one genie in Agrabah, right? Perhaps, the producers can stunt cast Robin Williams as a distant cousin or even father of Cyrus – how cool would that be?! Lithgow seems perfectly cast as the White Rabbit. He just has such a distinctive voice, though I do hope he channels some of his “3rd Rock From the Sun” character Dick Solomon while he voices the White Rabbit.

I was a little confused at first with Cyrus and the Knave of Hearts. At one point, I thought they were the same person/character, but quickly realized I was wrong.

It was recently announced that Naveen Andrews (“Lost”) has been cast as Jafar.

The preview whets my appetite for more, and I can’t wait for the premiere!

Are you a fan of “Once Upon a Time”? Will you be watching “Wonderland”?