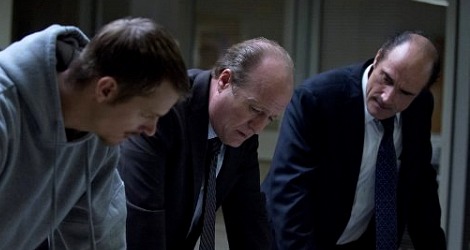 Things pick up where they left off last week, with Pastor Mike/Mark in the back seat of Linden’s car, telling her to drive “away from the lights.”

Then he starts rambling. “You think I wanted this?” he says. “Everything I had was here, and now it’s gone.”

He tells her he’s doing the lord’s work with the kids. “These kids are in so much pain … if only you could see what’s going on inside them, you have no idea … but I see them.”

Bullet’s at the station telling Holder that Pastor Mike/Mark has taken Lyric to the woods, where he killed all the other girls. Holder tells the chief he trusts Bullet, and the chief dispatches a team to search the four-mile area of woods.

Linden tries to talk to Pastor Mike/Mark about being in the foster system. I guess this is probably some sort of tactic – engage with the hostage taker. But their discussion is being heard back at the station, thanks to Linden’s transmitter she left on in the car.

“You have choices right now,” she tells him, “but if my guys find out you’re pointing a gun at me … if I don’t report in and we keep driving around the city, somebody’s bound to find out.”

Smart, Linden. She’s giving the guys at the station a travelogue as best she can. Meanwhile, the Pastor says he was trying to detox a girl at his house for several days, and he lost his ministry, because people got the wrong idea.

Oh dang, somebody at the station makes a joke about Linden, and Holder tells him to leave before he breaks his face. Go, Holder. Meanwhile, the Pastor has Linden drive into some sort of underground parking lot. “I used to find them hanging out down here,” he tells her.

Linden smokes a cigarette, likely thinking it might be her last. She tells the Pastor that she didn’t lose her son in a custody battle, like she said earlier. But she lost him all on her own. She couldn’t be the kind of mother he needed.

The Pastor continues as if he didn’t hear her. “Sometimes the ones who hide in the woods are the ones who want to be found the most,” he says. Then he tells her to take him to the water. Through her discussion, Holder figures out where she is and some cops are dispatched.

Pastor finds the transmitter and makes her pull off the road, then drags her to the top of an unfinished bridge and points a gun at her head. Then he kneels beside her and starts praying, then tosses the gun into the water as the cops show up and apprehend him. She tells them he doesn’t have a gun and jumps in front of him so they don’t shoot. “If you make these men shoot you, they’ll carry it all their lives,” she says.

He finally takes his hands out of his pockets, and the cops take him away, as Holder sits down beside Linden and reaches out to console her. There’s no hug, which is telling for their relationship. It’s not a hugging relationship, because if it was, this would be a hugging time.

Ok, so now the Pastor is incarcerated. I’m guessing much of the rest of this season will be tying Seward’s murders to this case, and figuring out how Kallie’s mom’s boyfriend is involved.

Seward tells his attorney (I think it’s his attorney) that he doesn’t want to hang; he’d rather take the injection. But they need to talk to Linden, because she doesn’t believe he did it. And right about that time, Seward has a panic attack. This immediately makes him seem more real and less guilty to me. Do killers have panic attacks? Wouldn’t they always be in a complete panic?

Back at the station, we learn that Lyric was out hustling all night. She walked out of the Pastor’s house, meaning Bullet lied to Holder, which doesn’t sit well with him. He yells at her and tells her to “get out of here right now, before I bury your ass so deep in the foster care system you’ll never get out … I don’t care about you … I’m not your friend … you’re just a nobody!” Ouch! And I had such high hopes for their friendship.

But look, Bullet nearly got Linden killed, and it’s clear that Holder is connected to Linden in a way nobody else is. Later, he brings Chinese food back to Linden’s house, where they eat and discuss the Seward case.

Holder and Linden have a moment. “I thought I lost you there for a second, just when I was getting used to you,” he says. Linden describes what it was like with the Pastor, and how that’s how it must have felt for all those girls, that his eyes were the last thing they were going to see. “But it wasn’t him,” she said.

Linden and Holder look at pictures of the Seward case, and Holder takes the Seward file with him, saying she’s got tunnel vision.

Becker’s wife goes to the station and asks Henderson if he’s seen him. She says Becker hasn’t been home in a couple of days, and she just needs someone to talk to. I’m not sure where this is headed, but at this point, it basically has no connection to anything else going on.

Seward calls Linden and says he can make it happen for her to talk to Adrian. “I didn’t kill my wife. I wasn’t there that night, and you believe me,” he says. “Yes, I do,” she replies.

Lyric and Bullet have words. Lyric says she’s with Twitch. She doesn’t belong to Bullet. And oh, by the way, she’s not gay. A despondent Bullet goes to score some drugs, and the guy says he just sold to a girl who had her finger chopped off – Angie.

Bullet finds Angie, who’s about to leave town, and tells her she can’t go. “There’s a lot of girls out there who need your help,” says Bullet, offering Angie the drugs in exchange for info on who the killer is.

Things end with Bullet at a diner frantically trying to call Holder, who doesn’t pick up. A car drives up outside the diner and someone watches her through the window. Could she be next?

Only three episodes left! Where do you guys see things headed? Somehow, they have to tie everything together – Seward, Kallie’s mom’s boyfriend, missing girls, and both new and old murder cases.

And who knows, maybe something might happen between Linden and Holder. On one hand, I sort of want them to go there; on the other hand, I don’t.