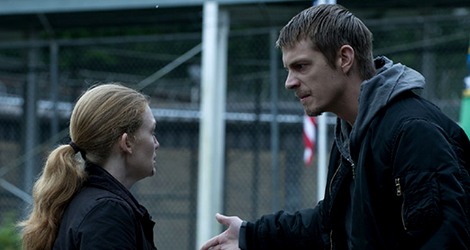 This episode of “The Killing” was both quiet and extremely intense. The entire episode took place either inside or just outside of the prison where Ray Seward awaited execution for the murder of his wife. But did he do it?

The episode begins with shackles and a hood being put on someone, with an executioner’s narration straight out of the Old West, ending with, “Mr. Seward, would you like to make a final statement?”

And then he’s hung. Only it’s not him. It’s a dummy. I guess it’s a practice run. The real thing takes place in 12 hours, and Linden believes Seward didn’t kill his wife. She walk into the prison and gets on the phone with Seward with that ominous glass wall between them. He chastises her for not calling him yesterday. “I had other things to do,” she says, holding up the rings in a plastic bag and asking if he knows anything. The wedding ring, “it’s a fake,” he says. “Cost $30 … used goods … like my wife.”

He says there’s a scratch on the inside. Linden inspects it and says she has to make a call. This ring was  found in the trophies in Joe Mills’ possessions, once again confirming her belief that Seward didn’t murder his wife.  She calls Holder and says he needs to get the Seward file over to her ASAP.

Becker … he’s a puzzle. What is up with him? First he’s talking to Seward through the cell. Then he tells Henderson that he’s a vital part of the team, and no one can perform his duties better than him. So, apparently, he’s back ON the execution team.

Linden calls the attorney general, who says he needs corroberating evidence about the ring in order to grant a stay of execution.

In walks Adrian and his foster mom. But Seward wants to see Linden again. He asks about Adrian. Says he keeps hearing the fluorescent lights buzzing. Linden says it’s the adrenaline. “Everything’s moving slowly, but happening so quickly too,” she says. Then someone comes to take Seward away, leaving Linden to sit there for an hour.

Becker and Linden trade verbal barbs. She says she has a right to see him. When Seward comes back, he says they weighed him again. As I suspected a couple of episodes ago, they need to do that for the hanging.

Seward is nervous, panicky. Linden wants more about the ring. He doesn’t want to see Adrian. “Maximum security’s like a family tradition,” he says, noting that his father and grandfather were both in prison.

Seward says he beat his wife. He took out a 20-year-old’s eye. He crushed a man’s jaw with a steel pipe. “I don’t have any illusions about you,” says Linden. “I’m here because I made a mistake.”

Holder shows up with the files. He’s in a bad way. He’s been drinking. “A scratch on a ring … really think the state’s gonna give you a stay on that?” says Holder. “They don’t even do that with DNA.”

Holder and Adrian talk outside while Linden shows Seward a photo of his wife wearing the ring. She’ll send it to the AG and see what he says. Seward says he wasn’t even there for Adrian’s birth. “I kinda hated him actually. I bet you can relate,” he tells Linden.

Then Adrian throws a giant wrench into the storyline by telling Linden that Seward was indeed there that night. “He was the one I saw,” he says. Yo, Adrian! What?! This is where I start to suspect that maybe Adrian had something to do with the murder of his mom.

Holder goes out back with a case of beer and starts throwing beer at the prison grave markers. That’s right, Holder. Better them than you. Don’t spiral down into an alcohol haze again.

The AG is considering the new evidence. It’s a long shot, but at least it’s a shot. But … “I know that you were there that night,” Linden tells Seward. “Don’t lie to me. You were there, you son of a bitch. You played me.”

But he’s not telling her everything about that night. Why was he there? My mind again goes to Adrian. Could Seward be protecting him? “Every night,” he says. “Every night I walked out on him.”

At this point, Linden has HAD IT with the whole Seward thing. She’s just done. She heads out and starts to get in the car, but Holder has the keys. “So you’re just leaving?” he says. “This is like a pattern with you, you know that? You’re always leaving, never stay, because if you did, you’d want it, you’d need it, and then you’d get hurt … why you always takin’ off? … we never stay, and in the end we lose everyone.” Which is precisely why these two should be together. They can not leave each other, right?

Holder tries a different tactic as only Holder can try. “I’m not gonna try and kiss you again, Linden,” he says “Keep dreamin.'” That makes her laugh and turn off the car. Then she gets a call from the AG. The evidence isn’t enough. No stay. “I’m sorry,” she tells Seward.

“Why were you in the apartment that night?” she says. “Why can’t you just tell me?” Because he’s protecting Adrian!

Linden begs Seward to see Adrian, but just as Adrian is outside the door, Becker comes in and says, “Visiting hours are over, sorry.” What?! The guards tackle Seward as Adrian waits outside the door. Becker did it! He doesn’t want Adrian to see Seward, because he’s afraid something is going to come out about him being there that night!

Linden makes a frantic call to get permission for Seward to see Adrian, but Holder takes the phone from her. “It’s over,” he says.

The guards get Seward ready to hang, then walk him down the hallway to the hanging platform. Seward hesitates in a panic, then sees Adrian outside the window. Adrian waves at him, and Seward seems to gather strength from that wave. Because he knows he’s doing the right thing to protect his son!

I liked the camera work as he heads into the hanging room. Things are blurry, panicky. Linden sits and watches, as the executioner reads off a statement. “Would you like to make a final statement at this time, Mr. Seward?”

“Salisbury steak is not steak,” he says. “It’s ground beef. Now, let’s get this show on the road.”

He’s shaking like a leaf as Becker gives him final preparations. Becker looks darn frightened, too (afraid Seward will say something that would incriminate him?!) The hood is put on his head, the rope around his neck. He drops down and Linden looks away. Seward is still alive and continues to make gasping sounds for a few moments.

Thoughts on this episode? Who else thinks Adrian had something to do with the murder of his mother? And where does Becker fit into it? Was he there the night of the murder? Why did he get so emotional when he gave Seward a final look? Leave thoughts below!