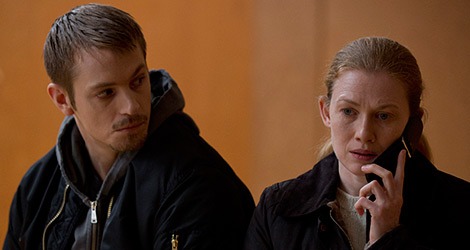 Sweet Mother of God, this week’s episode of “The Killing” is the best of the season so far. It kept me on the edge of my seat from start to finish, with one scene catapulting into the next with fierce abandon.

Probably a combination of Jonathan Demme directing and knockout performances by all, including (once again) Amy Seimetz as Danette. I’m hoping she lands an Emmy, because she certainly deserves it. In the scene where she’s in the interrogation room with Joe Mills, you could just feel her panic and fear and hatred, especially when she leaped across the table at him like a wild animal.

Holder also deserves special recognition, as he tries to process his role in the death of Bullet. His grief almost led him to seek comfort in the arms of Linden, but she pushed him away. I’ve been thinking they’re sort of perfect for each other, but this isn’t how it should proceed. A relationship between them shouldn’t be the result of grief.

The episode begins with Danette leaving “missing child” flyers on car windshields. When she goes home, the door is open and the place ransacked. She calls out for Kallie, but finds only Joe, who beats her up and steals her money and car. At the station, she tells Linden and Holder that he took camping and fishing stuff, but she also has a storage unit with all of his backwoods maps.

At the storage room, Linden and Holder find a sleeping bag with a still-smoldering cigarette in an ashtray, so they race through the building in pursuit of Joe. Joe and Linden fight, with him landing several blows, then putting a choke-hold on her. She gets the last kick in, though, after Holder tackles him. The camera work in this segment is all shaky “Blair Witch Project,” and I love it.

The cops flock to the building and find a box of rings – Joe’s victim’s rings. But as Linden is looking through it, she also finds Bullet’s chain, and races down to the garage, where Holder is about to open the trunk of a car. Linden begs Holder to step away from the trunk. “Don’t open it,” she says. “Please, Holder. Just come over here. You don’t need to be here.”

Instead, he opens the trunk and finds Bullet’s body, immediately recognizable because of her “faith” tattoo. Oh, Bullet. Oh, Holder. She didn’t go quietly, though. Her wrist is broken, and she has dozens of defense wounds.

Down at the station, Holder has the option of going in and talking to Joe, “no witnesses, no questions.” He opts out, and there’s a great scene where he’s in his car as the rain is falling – rain, always rain – and his girlfriend gets in the car with him. She tries to sympathize, but he pushes her away. “This tattoo, do you even know what it means?!” yells Holder. “I’m an addict! I’m a tweaker! I shot meth into my veins every day!” She doesn’t understand. She’ll never understand.

Inside, a whole crowd of people are behind the one-way glass as Danette goes in to talk to Joe. “You had her cellphone,” she says. “What did you do to her in that hotel?!”

Danette can barely stand to look at him, and says that Joe’s mother told her what he did to those kids. “She says you’re not her little boy anymore. She told me everything you did to those girls in the hotel, in those films. Why?”

And here’s that great scene where Danette lunges across the table at him, and I practically stood up out of my chair. “What did you do to my baby?!” she yells. “Where is my daughter?! What did you do to her?!” She reminds me of Amy Ryan in “Gone Baby Gone.” Only she actually cares about her daughter.

Meanwhile, Linden notes that Kallie’s ring is not with the others. She also asks whether they’re running any forensics connecting Joe Mills to Tricia Seward’s body.

Linden finally gets to question Seward’s son, Adrian (a terrific Rowan Longworth). Does he remember seeing anyone else in the apartment that night besides his mom? Yes, he says.

Adrian was in the closet that night. It was late, and he woke up. It was dark, but the Christmas tree was on. “My mom kept the lights on the Christmas tree at night.” Linden holds up a picture with a group of headshots, and Adrian points to number 5 – Joe Mills. He’s positive it was him. “Can I see my dad now?” he asks.

Skinner gives a press conference and says, “The so-called pied piper is finally off the streets, and the city of Seattle can rest easy tonight.” Why do I not believe that?

Linden picks up her messages – five from Seward – but as she starts to call him back, she runs into Danette in the hallway. Danette tells Linden that she thinks she deserves it (Kallie missing). She always picks messed-up guys, but Joe brought Kallie Christmas presents. One of those dolls with the hair that grows. Kallie was 12 at the time, which was three years ago. Danette also tells Linden that Joe was in Alaska that Christmas, meaning he wasn’t in Seattle the night that Tricia was murdered.

Linden goes to Holder’s and lets herself in with the key in the flower pot. She tells Holder that Mills was out of town the night Tricia was murdered, but no one knows that but Danette. Linden could use Adrian’s testimony to get Seward a stay of execution. Even though it’d be burying the evidence, Holder reminds her. “Seward is going to die tomorrow if I don’t,” says Linden.

Holder is grieving over the fact that he should have picked up Bullet’s call. Feeling completely desperate and grief-sticken, he leans in for a kiss, but Linden pulls away. “I’m sorry,” he says, and then breaks down weeping uncontrollably. Oh, this is killing me. Is this why the show is called “The Killing”? You’re killing me, Holder!

Later, while Holder is in the morgue looking at Bullet’s body, the medical examiner tells him that Bullet called the station several times last night. At this point, Holder is a loose cannon and goes to Reddick’s house, where he beats the living daylights out of him, as Reddick’s wife and daughter look on in panic.

The episode ends with Linden in her car looking at a baggie with four rings that couldn’t be tied to a particular girl. I believe she’s sitting outside the penitentiary.

I’m a little confused on who Adrian shot. Did I hear correctly that a black guy showed up at the house, and Adrian shot him? Do you think it was because Adrian thought this would get him into the prison so he could see his dad?

The guy in the cage next to Seward who’s trying to encourage him and give him religious advice, and then starts laughing and says, “I thought you’d be harder to crack … on the outside I use my hands, felt ’em struggle and then just give in. But in here? The words do the killing for me. I’ve been killing you since the day we met.” That’s harsh, even for a killer.

Seward gets an extra hour of yard time before his execution. Yippee. “Get as much air into those lungs as you can,” says the guard.

The execution racket is apparently a big deal. One of the guards says he’s already got Seward’s hoodie and shackles sold.

Skinner tells Linden that she should stay on after the case. “This is where you belong,” he says. Which is timely, because they’ll probably need her since Holder will be suspended for punching Reddick out.

It took some serious shock and grief to get Holder to give Linden a cigarette.

When we learned that Joe Mills was out of town the night Tricia Seward was murdered, did anyone else immediately think TWIN!? That old soap opera trick.

Interesting storyline with Twitch and Lyric this week. He’s got some extra money, and she’s all happy that they can finally start to live their dreams, but then he tells her that Bullet is dead. Instead of going to L.A., he puts a deposit down on a little apartment, and Lyric is overjoyed when he takes her there. I didn’t have high hopes for Twitch at the beginning of this season, but this turned it around for me.

What did you guys think of this episode? Any theories on who killed Tricia Seward? Think Linden and Holder will get together before the end of the season? Do you WANT them to get together? Leave comments below!