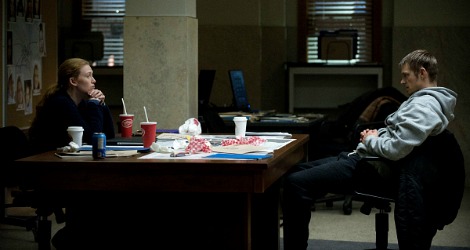 This episode of “The Killing” had a couple of themes going for it. One being that both Linden and Holder are pretty much back to being exactly what they were in the previous seasons. And the other being  an element of protecting people you care about. More on that later.

The episode starts with that suspicious Pastor Mike again — remember I called foul on him in last week’s episode, “Eminent Domain.” He’s just a little toooo creepily nice and calm to be an upstanding guy. But will they spend the next five episodes tracking this guy? Only the fly on the wall of “The Killing” writers’ room knows for sure.

“It’s mostly girls, Pastor. Not a lot of boys up there. Why is that?” – Holder, commenting on the photos on the Beacon wall.

“Girls like getting their picture taken more … and they’re more vulnerable.” – Pastor Mike

“What’s the attraction … to working with kids?” – Holder

“Nobody misses them or goes looking for them. They’re the throwaways of the world.” – Pastor Mike

“That’s what the killer’s thinking too. Easy prey. Fallen angels looking to be saved.” – Holder

I wondered if we’d seen the last of Cody, and he made an appearance in this episode. He asked Linden why she hasn’t returned his phone calls, saying everything gets to be on her terms. “Is this how you were? That other life of yours? Is this the way you treated people? It’s no wonder you don’t have anyone in your life,” he says.

Linden wastes no time telling him exactly how it is. “I was pretending to be something that I wasn’t with you, and now it’s over,” she says. “Let go of me. Because you really don’t want me to tell you a third time how things are.” So long, happy Linden.

So that’s part of what I mentioned at the beginning of this recap about Linden and Holder returning to their former selves. As for Holder, both Bullet and the Sergeant mentioned Holder’s choice of K-Mart clothing – jeans and a sweatshirt. No suit anymore. Maybe Holder’s not exactly “climbing up the food chain” at the Seattle P.D. like he said in the first episode this season.

As for the protection element, when Linden told Holder about the incident with Cody, he said, “Did he hurt your feelings? I’ll beat his ass. Just say the word.” He might have been joking around, but I have a feeling he was dead serious.

Does anyone else think that Holder and Linden are sort of perfect for each other? They understand each other, and there’s no need to try and explain to a civilian partner what they do at work.

Then, when Holder saw Bullet and Lyric together as a couple, he told Bullet, “You can be as smooth as Velveeta, but at the end of the day, you’ve gotta protect your girl, keep her safe.” If only Bullet was able to do that…

For being a pretty good judge of character, I was surprised that Bullet didn’t have better instincts about Pastor Mike. She tells Holder that Pastor Mike is ok. “It’s not him,” she says. “He’s like the only guy in Seattle who’s not a pedophile.”

But shortly thereafter, we learned she was wrong on that score. And unfortunately, Lyric got caught in Pastor Mike’s crossfire when she and Bullet stayed at his house. (I had a bad feeling when Bullet and Lyric got close, and Bullet told her she loved her. The kiss of … death?)

In addition to Holder revealing too much to Pastor Mike, Bullet mentioned to Pastor Mike that the cops were on the wrong track, but then saved herself (though badly) by quickly adding that it was about Kallie not being at The Beacon the night she disappeared. But by then, Pastor Mike knew the jig was up

And we learned that he’s not really Pastor Mike at all. He’s Pastor Mark. The real Pastor Mike died four years ago, and Pastor Mike, after kidnapping a girl in Arizona six years ago and going on the run, became “Pastor Mike.”

Peter Sarsgaard continues to knock it out of the park. In this episode, he ran the gamut of emotion from creepy-happy to just plain creepy to panicky and scared. I hope he gets an Emmy nomination out of it.

Amy Seimetz had less screen time this week, but she continues to wow me with her performance. I just wish Danette had been this attentive to Kallie when she was growing up. Maybe she wouldn’t be in this awful position of wondering if her daughter is dead or alive (though she told the other mom at the police station that Kallie is most certainly alive).

I loved the sequence where Linden talked to Pastor Mike, then found the note on her car with “He’s lying” written on it, which led them to the pizza place, and to the person who gets my “favorite actor of the episode” award — the gay black guy who told Linden and Holder that he saw a girl in the alley and called Pastor Mike. When Pastor Mike got there, the girl started screaming and ran off. Pastor Mike got in his car and chased after her. When he showed back up, he was alone and had blood all over his shirt. That’s what led Linden and Holder to the realization that Pastor Mike had a different car.

And after watching “The Killing” for two and a half seasons, I know enough about Linden to know that her instincts are spot on. If she doesn’t think Ray Seward should be on death row, then he no doubt shouldn’t be on death row. “He didn’t do it,” she tells the Sergeant, referring to the killing of Tricia Seward. “I believe you,” he said. And then … they have a little moment. Hmmm…

Was anyone else creeped out when Becker showed his son the hanging box? Then the kid seemed all excited that his dad might actually do the hanging. “I noose him,” said Becker. “Put the rope around his neck. Right and wrong, Frankie. It’s a choice.” Yikes. Scared straight at a tender age?

What? Holder knows Bible verses? Didn’t see that coming, but then again, not really surprised when it comes to Holder. Here’s the King James version of Ephesians 1; verse 7: “In whom we have redemption through his blood, the forgiveness of sins, according to the riches of his grace.”

What was the scene with Seward being weighed all about? Something to do with the hanging, I take it?

“She wanted to be that person … living on an island, not smoking…” – Linden
“Sometimes what you get isn’t really what you want.” – Holder

I jumped — literally jumped — at that last scene.

Your thoughts on this episode of “The Killing”? Do you think Lyric is still alive? Will Linden stop the execution of Seward? And how long do we have to wait until Linden and Holder end up in the sack? Leave thoughts below.