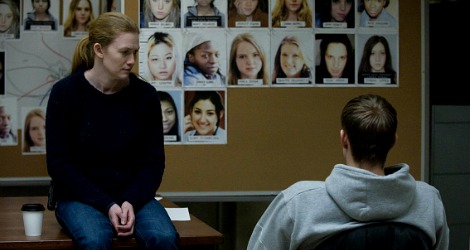 This episode of “The Killing” starts with Kallie’s mom, Danette, reeling after finding her daughter’s cell phone in her boyfriend Joe Mills’ bag. So she goes to the police station to find Linden, but when the cop at the front desk calls B.S. on her, Danette goes ballistic. Maybe she’s not such a bad parent, after all. Maybe.

Then again, let’s revisit what Danette said in episode four:

“Your daughter’s a prostitute. Are you aware of that?” – Linden

Not exactly Mother of the Year material. You can’t blame Linden for being so cold with her. Linden asked Danette point-blank where Joe Mills was, and Danette lied. And now Joe’s on the run, and her daughter might be dead. And it’s on her.

“You have no idea what it’s like to have a kid and be alone, and have everything riding on you,” said Danette. Unfortunately, Linden does know.

Meanwhile, Linden and Holder talk to Angie, the girl they found last week. The guy who took her said he’d “save her” (Pastor Mike from the Beacon, perhaps?). Ok, is Holder the most zen detective, or what? When Angie freaks out, he calms her down. I’d want him by my side during a freak-out.

Angie also worries that “he got the left one” (meaning her ring finger on her left hand). “What if someone wants to marry me? Do you think it matters?” So sad. And there’s still no real connection to Seward.

Every time they cut to Seward and his prison buddies, I always feel like it’s a different show. I know there must be a connection between the current murders and the reason Seward is in prison, but I’m just not feeling it yet.

Then again, Peter Sarsgaard is so creepy that it makes it interesting. And when his cell buddy across the hall hangs himself, it almost seems like Seward has a heart buried in there.

Linden and Holder go back to the scene of the murder. She puts a picture of Trisha where her body was found. Linden said she found Adrian hiding in the closet that night. She goes into the closet, and finds stars on the ceiling, “because he slept here,” and a vent-type panel at the bottom. Meaning if Adrian was sleeping in that closet the night his mom was murdered, he saw the killer. Why didn’t this come out before?

The scene with Linden and James Skinner makes me a little crazy. He chides her for being obsessed with the Seward case, but she says she’s “following the evidence … it’s the same case.” Why is James so willing to let it go when she’s got a solid lead about Adrian seeing who killed his mom?

And I missed something in the storyline about what happened to Linden three years ago. Someone fill me in. Whatever happened, Skinner was there, too.

The scene with Seward and his father gives us a little backstory to his life. His dad left the family high and dry, but tells Seward, “I taught you how to be a man, don’t you forget that.” Yeah, nice job, Dad. Look how that turned out.

Still, his dad says he’s proud of him “for doing your time and going out like a man.” “Dying in a jumpsuit doesn’t make you a man,” says Seward.

Linden goes to talk to Seward in prison. She asks if he’s ever heard the name Joe Mills. Seward says no. “Your son saw the killer,” says Linden. Seward says he put the stars on the ceiling of the closet. “He didn’t like to sleep in his bedroom,” says Seward. “I know you didn’t kill your wife,” says Linden.

And yes, even Seward is annoyed with Linden that this didn’t come out before. “And you came to this realization, what? Three years after the fact?!” he screams. “Twelve days before I hang! Don’t come back here!” Then he gets up and stomps out.

Clearly, something is going on. Seward might not be the horrible awful person he’s made out to be. He put stars on his kid’s closet, after all. Is there a connection between Seward and Pastor Mike?

Not much Holder in this episode, which is always a bummer. But that little monologue he made at the end while he and Linden were looking at the photos of the girls makes me think more and more about Pastor Mike. “A shepherd and his flock,” says Holder, staring at the girls photos on the wall of the police station. Then when he and Linden go to the Beacon, he repeats those same words while staring at the photos of the girls on the wall there.

Your thoughts on this episode of “The Killing”? Is Pastor Mike a red herring? Too easy of an answer? We still have six episodes left in this season.