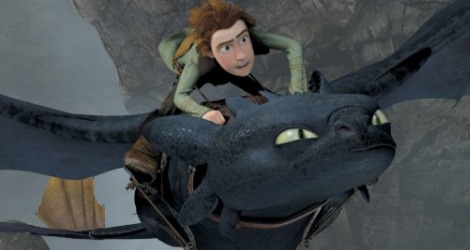 “How To Train Your Dragon 2” isn’t slated for release until June 20, 2014, but Dreamworks recently released the official teaser trailer, and it is, quite simply, absolutely gorgeous!

The trailer doesn’t give away any of the plot; instead, we get to watch Hiccup flying Toothless, skimming just above the ocean and then soaring up into the air among the clouds. It’s a stunning sequence that’s quite thrilling to watch.

And make sure you stay tuned to the end – after the film’s release date is flashed on screen, the teaser cuts to a shot of Hiccup removing his flight helmet. An older Hiccup – five years older, it appears!

According to ScreenRant, here is the synopsis for “How To Train Your Dragon 2”:

“The thrilling second chapter of the epic “How to Train Your Dragon” trilogy brings back the fantastical world of Hiccup and Toothless five years later. While Astrid, Snoutlout and the rest of the gang are challenging each other to dragon races (the island’s new favorite contact sport), the now inseparable pair journey through the skies, charting unmapped territories and exploring new worlds. When one of their adventures leads to the discovery of a secret ice cave that is home to hundreds of new wild dragons and the mysterious Dragon Rider, the two friends find themselves at the center of a battle to protect the peace.”

Watch the official teaser trailer, and tell us your thoughts in the comments below!