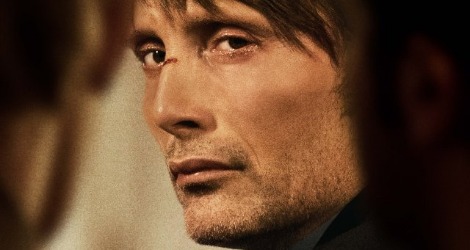 Danish superstar Mads Mikkelsen, the handsome actor with the freakishly high cheekbones, was the center of attention last week at a screening and reception for his latest film, “The Hunt,” at the Elinor Bunin Film Center in Lincoln Center.

Mikkelsen, who plays the spectacularly inscrutable cannibal Hannibal Lecter in NBC’s “Hannibal,” which was just renewed for another season, is strangely mesmerizing and other-worldly looking. Tall and slender, he came off looking cool and collected in a tight brown suit and satiny shirt while everyone else sweated in the hot, crowded room.

Long a star in Denmark, Mikkelsen’s breakout role was in 2006’s “Casino Royal,” as Le Chiffre, the icy villain with the milky, white eye that oozed blood.

In “The Hunt,” Mikkelsen plays Lucas, a teacher in an idyllic Danish village who’s accused of sexually assaulting the seven-year-old daughter, Klara (Annika Wedderkopp), of his best friend, Theo (Thomas Bo Larsen). Mikkelsen’s performance earned him the best actor award at the Cannes Film Festival last year. Also in 2012 he starred in the Oscar-nominated historical drama, “A Royal Affair,” as the doctor to King Christian VII of Denmark and lover to his wife, Queen Caroline, a role that featured Mikkelsen in some steamy sexy scenes.

During last week’s reception, as he was surrounded by shutterbugs, Mikkelsen greeted another tall striking man who everyone assumed was an actor, but was actually “The Hunt” director Thomas Vinterberg, who co-wrote the screenplay with Tobias Lindhom. (Next up for Vinterberg is an adaptation of Thomas Hardy’s classic novel “Far From the Madding Crowd,” starring Carey Mulligan and Matthias Schoenaerts.)

“The Hunt” is a chilling drama about a man who gets caught up in a Kafkaesque situation that he can neither explain nor fight. Long-time friends of his from the tiny Danish hunting village where he grew up, readily and inexplicably believe he is molesting the kindergarten students he taught.

During all this he’s in the midst of a divorce and fighting with his ex over custody of his teenage son, Marcus (Lasse Fogelstrom), who stands up for him and never stops believing in his father’s innocence. As Lucas becomes more and more of a pariah by his neighbors, who throw rocks through his windows and beat him when he tries to shop, the hysteria and violence against him escalates. It’s a gut wrenching experience to watch and wonder how this decent man’s nightmare will end.

The two handsome Danes with great hair stuck around after the screening for a Q&A.

Vinterberg explained his collaboration with Mikkelsen and the actor’s input: “In the original script that Mads read he was a blacksmith. He was a man of few words. He was a tough guy inspired by Robert De Niro in ‘The Deer Hunter.’ Mads and I together turned him into a schoolteacher. We made him into a Scandinavian soft man in the eyes of the children. Normally I wouldn’t make a film about a teacher, not the most sexy thing, but he brings all the sexiness and manliness [to the role], so I thought then, well, we can afford it.”